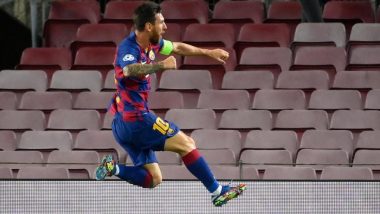 After losing the La Liga 2019-20 to Real Madrid, team Barcelona was nothing short of amazing in the Champions League 2019-20 game against Serie A’s Napoli. The Catalan Giants went on to win the Round of 16 at Camp Nou by 3-1. The teams stepped on to the pitch with both an aggregate of 1-1. It was Clement Lenget who scored the opening goal of the match within the first 10 minutes. Then it was a time for Lionel Messi’s masterclass who scored a stunning goal at the 23rd minute. Next in line was Luis Suarez who converted a penalty into a goal at the 45th minute of the match. Lionel Messi Exhibits Stunning Footwork in the Nets Ahead of Barcelona vs Napoli, Champions League 2019-20 (Watch Video).

The six-time Ballon d'Or winner was chased by way too many defenders and Messi even lost his balance. But all thanks to his quick footwork and then slammed a left-footed goal inside the far post as he was going to ground again. The video of the goal was shared by the netizens who went gaga over the goal by the Argentine. Check out the video of the goal below;

With this Lionel Messi now has 27 goals in Champions League round of 16 after scoring against his 35th opponent in Europe's premier club competition. Messi also has scored 1.3% of the goals scored in Champions League history. With this, the team will meet Bayern Munich who knocked out Chelsea last night. The match between Bayern Munich and Barcelona will happen on August 15, 2020, in Portugal.

(The above story first appeared on LatestLY on Aug 09, 2020 08:55 AM IST. For more news and updates on politics, world, sports, entertainment and lifestyle, log on to our website latestly.com).