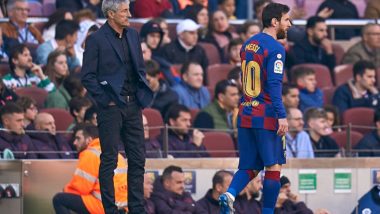 For a while now, rumours have been rife that not everything is fine at in the Barcelona camp. Particularly after the 2-2 draw against Celta Vigo where it was said that Barcelona star Lionel Messi was so annoyed with Quique Setien that he complained to the management of Barcelona to get rid of their manager. To add on to the woes, a video emerged online where Lionel Messi was seen ignoring the instructions by Eder Sarabia. This set the tongues wagging that all is not well at Camp Now. Before for the match against Atletico Madrid, Barcelona manager Quique Setien in a press conference spoke about the video which emerged online. Lionel Messi Ignores Instructions by Barcelona Assistant Coach Eder Sarabia During La Liga 2019-20 Match Against Celta Vigo (Watch Video).

The current manager of Barcelona downplayed the incident of a rift and instead emphasises that the overall atmosphere in the team is quite good. The 61-year-old also went on to say that these are random incidents and he does not pay heed to these things. “When you don’t win games everyone tries to stir the pot but this is the circus we’re in,” he said. He also confessed that it is true that they do not agree on everything but there’s nothing worth mentioning.

The team has already declared their 23-member squad for the game and the match is supposed to happen on July 1, 2020.  Ousmane Dembele continues to stay away from the team due to an injury. The Catalan Giants would be looking to seal two-point the gap between them and Real Madrid who are placed on number one of the La Liga 2019-20 points table.

(The above story first appeared on LatestLY on Jun 30, 2020 11:07 AM IST. For more news and updates on politics, world, sports, entertainment and lifestyle, log on to our website latestly.com).