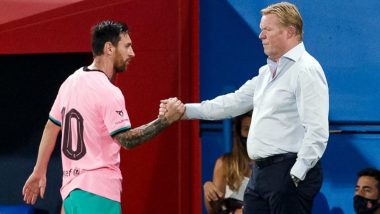 Lionel Messi, whose future at FC Barcelona was in doubt after he expressed his desire to leave, has decided to stay at the club at least till his current contract expires in 2021. Ronald Koeman was appointed as the new manager following the Champions League humiliation and has said that the Argentine will be centre of his rebuilding project. However, the Dutch boss might have a new problem as his skipper might miss the first El Clasico of the season. Lionel Messi Scores Twice As Barcelona Beat Girona in Pre-Season Friendly (Watch Goal Video Highlights).

The new La Liga season kicked-off on September 12 but Barcelona are yet to play their first match in the tournament. The Catalan side begin their 2020-21 footballing season on September 27 when they take on Villarreal in the domestic league. According to the competition’s fixture’s, the first El Clasico of the season is scheduled to be played on October 25 and Lionel Messi could miss it due to international duties. Lionel Messi Cleared by CONMEBOL to Play in Argentina’s Opening 2022 World Cup Qualifier Match Against Ecuador in October.

Argentine will begin their journey to the 2022 World Cup in Qatar next month as they take on Ecuador on October 8 and Bolivia on October 13 in the CONMEBOL qualifiers. And as per the quarantine regulations in Spain, anyone returning from South America is required to quarantine for 14 days, meaning Messi won't be able to play in La Liga matches during that time period.

The Barcelona skipper will miss three matches in that time period in Spain’s domestic league. The Catalan side plays against Getafe, Alaves and Real Madrid and with Lionel Messi unlikely to feature in these games, the Blaugranas run the risk of losing crucial points.

The CONMEBOL recently uplifted Lionel Messi’s suspension which allows him to be a part of the Argentina squad for the upcoming qualifiers. The Barcelona skipper was serving a one-match ban for an altercation with Chile’s Gary Medel in last year’s Copa America third-place playoff which saw both players being sent-off.

(The above story first appeared on LatestLY on Sep 18, 2020 12:48 PM IST. For more news and updates on politics, world, sports, entertainment and lifestyle, log on to our website latestly.com).