Liverpool coach Jurgen Klopp has defended his club's transfer policy ahead of the new season. 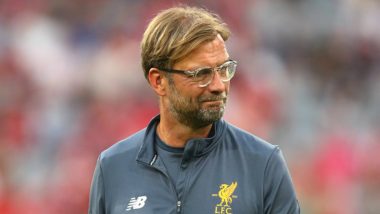 London, July 28:  Liverpool coach Jurgen Klopp has defended his club's transfer policy ahead of the new season. Speaking just a day after Manchester United coach Jose Mourinho had a dig at Liverpool's transfer activity over the summer, Klopp explained why he had spent a world record $87 million on AS Roma's Brazilian international goalkeeper Alisson, reports Xinhua news agency.

"Everybody thinks it's a lot of money and It is a lot of money, but he could've left for crazy money," said Klopp highlighting that the price for Atletico Madrid's highly rated Slovakian keeper Jan Oblak is "100m euros."

"The goalkeeper market is different because it's not each year that there is anybody available. We didn't know exactly if Alisson is available or not, but from a specific moment we realised obviously he is available and that's the moment when we decided we want to go for him," said Klopp

Liverpool signed Alisson to try and end the problem with their goalkeepers with neither Simon Mignolet nor Loris Karius convincing.

Karius committed two bad errors in the Champions League final against Real Madrid, although he was later revealed to be suffering from concussion after Madrid defender Sergio Ramos "collided" with him.

Speaking from Liverpool's US tour, Klopp insisted he had confidence in all of the keepers in the Liverpool squad.

"We are really fine with our goalkeepers, so there are no doubts," he commented, saying Mignolet was "absolutely (English) Premier League highest-level quality, Loris Karius as well."

(The above story first appeared on LatestLY on Jul 28, 2018 02:33 PM IST. For more news and updates on politics, world, sports, entertainment and lifestyle, log on to our website latestly.com).