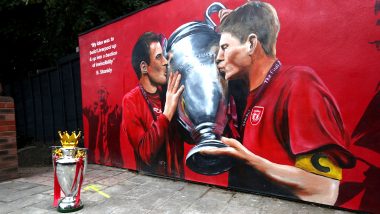 London, July 22: Liverpool great Graeme Souness has lauded the consistency of Jurgen Klopp's Premier League champions as they prepare to receive the Premier League trophy at Anfield on Wednesday night. "It's not just this season, it's the last two years… the consistency levels have been incredible," Souness, who led Liverpool to three league titles, told the BBC.

"They just missed out (on the title) last year, but they are the current Premier League champions, World Club champions and European champions. Their consistency is just off the charts and I know how hard it is to achieve that," he said. Liverpool's EPL Title Win Celebrations Rehearsed, Viral Video Shows the Scene at Anfield.

Liverpool will be handed the trophy after Wednesday night's game against Chelsea after the Reds won the title with a record seven games to spare, their first top-flight crown in 30 years. Manager Klopp has said that lifting the trophy at Anfield will be the most special moment for his team.

"I told the boys already that we have to prepare two things this week. Prepare for the game against Chelsea, which we will do in training, and we have to make sure that we really feel the right thing in the moment when it happens," he told Sky Sports.

"On Wednesday, we will cherish it. In this moment, we have to stop for a second, look at it, be really happy about it, enjoy it together with our fans all over the world, in heart and mind, and make it the most special moments of our life so far," said Klopp.

(The above story first appeared on LatestLY on Jul 22, 2020 11:28 PM IST. For more news and updates on politics, world, sports, entertainment and lifestyle, log on to our website latestly.com).