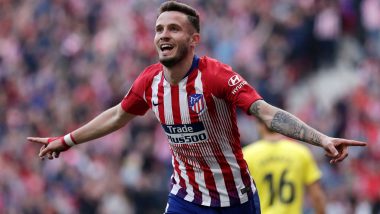 Manchester United fans are in dreamland after Atletico Madrid midfielder posted a cryptic tweet on Sunday (May 31, 2020) regarding his future. In the tweet, the 25-year-old said that he will be announcing his new club in ‘three days’ and the Red Devils faithful believe that his next destination is the red side of Manchester. Niguez has made 37 appearances for Atletico Madrid this season, scoring four goals and has also been a long time target of the record English champions. Manchester United Coach Ole Gunnar Solskjaer Says Need Time to Gel Again, but Players Are Mentally Ready.

Saul Niguez is among the crowd favourites has been one of the most important men for Diego Simeone and his tenure at the club. In the meantime, this tweet has left Atletico Madrid fans fearing for the worst as it is not the first time that they have seen one of their players create a spectacle around his departure. Have Joined Manchester United Because I Want to Win Trophies: Skipper Harry Maguire.

Couple years ago Antoine Griezmann did something similar as he made a documentary to discuss his future at the club in which he announced his desire to stay only to leave a year later.

However, this has Manchester United fans are jumping with joy as they think that the Spaniard will very soon be a part of their club. Some users even went on to check Saul Nigiez’s Instagram where they pointed out that he has followed the Red Devils and some of their players while removing ‘Atletico Madrid’ from his bio.

So Saul Niguez just started following us on insta after removing Atletico Madrid from his bio👀. Interesting🤔 pic.twitter.com/tCyG6eKEn6

Saul Niguez last 4 Insta Follows....he's trolling the United fanbase to announce an Esports club. Why is it always us... pic.twitter.com/fF6XH9DTze

Why no one is talking about @saulniguez he said he's signing for a new club in 3 days, and has started following some manchester united players on Instagram.#mufc pic.twitter.com/y3ou2yOCAV

Take this and come to Man United. pic.twitter.com/FU7NCC0axP

Saul Niguez still is a dream for Manchester United and according to reports the Premier League side are willing to pay his £135 million buyout class are looking to lure him away by offering him a wage increase of up to £200,000 a week.

(The above story first appeared on LatestLY on Jun 01, 2020 04:34 PM IST. For more news and updates on politics, world, sports, entertainment and lifestyle, log on to our website latestly.com).