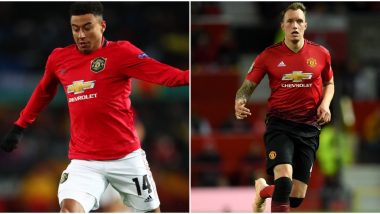 Manchester United are open to selling Phil Jones and Jesse Lingard in this summer transfer window, said reports. The Red Devils pair have endured a difficult campaign this season and could be heading for the exit door as United Ole Gunnar Solskjaer looks to bring in reinforcements to mount a title challenge and the likes of Liverpool and Manchester City next season. The summer transfer window for Premier League teams opens on July 27 (Monday) and with United already linked to some top English talents like Jadon Sacho and Jack Grealish, the club must sell some player to not only free up the squad but also accumulate revenue to spend big this summer. Manchester United Manager Ole Gunnar Solskjaer Says ‘We’ve Earned Our Right to Any Decision This Season’.

Solskjaer has already announced that the club intend to enhance their squad with some new signings as well as by promoting some talented prospects from the academy and if United qualifies for the Champions League – they must avoid defeat in their final league encounter against Leicester City – the club will attract the world’s top players with an added cherry of playing in Europe’s topmost competition. Paul Pogba Brutally Trolled by Manchester United Fans After Conceding Penalty Against West Ham in Premier League 2019–20.

According to a report in Manchester Evening News, Solskjaer is open to offloading some squad players like Lingard, Jones, Marcos Rojo and Chris Smalling. “As a club, we're always looking at promoting kids and adding players that are better than our squad anyway,” the Red Devils manager was quoted as saying after United’s 1-1 draw with West Ham at home.

Lingard, who came through the United academy and made his debut for the club in 2014-15, has now gone a complete year without a Premier League goal or assists to his name. when Solskjaer joined in December last year, Lingard was one of the manager’s most trusted players and a regular starter in United’s XI but has been pushed to the fringes due to poor form as well as the signing of Bruno Fernandes.

He could be further sidelined if the club manages to sign Jack Grealish from Aston Villa this summer. The 27-year-old attacking midfielder has already emerged as an interest for West Ham, whose coach David Moyes is said to be an admirer of Lingard’s playing style. Leicester City, Everton, Newcastle and even Arsenal are also linked with Lingard, who has won the Europa League, EFL Cup, FA Cup and the Community Shield with United and scored in the finals of the all three domestic cup competitions.

Phil Jones, who was tipped as the club’s next great centre-back by Sir Alex Ferguson has failed to live up to the potential and at 28-year-old his good years are getting over fast. Jones has also been put on sale as reported by Duncan Castles, who said that Unites are looking to sign a new defender and sell Jones, Smalling and Rojo.

Jones was signed by Ferguson from Blackburn Rovers and has made over 100 appearances for the club but has failed to nail the centre-back spot due to frequent injuries and inconsistency.

(The above story first appeared on LatestLY on Jul 23, 2020 05:57 PM IST. For more news and updates on politics, world, sports, entertainment and lifestyle, log on to our website latestly.com).