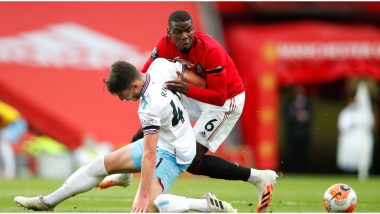 Paul Pogba was once again at the end of heavy trolling on social media after conceding a penalty against West Ham United just at the cusp of half-time. The Manchester United midfielder was punished for handling the ball inside the penalty box after he tried to protect his face with his hands during a West Ham free-kick. Michail Antonio then stepped for the visitors and scored from the spot to put them ahead after sending United goalkeeper David de Gea the wrong way. Most Goals in EPL 2019–20: Jamie Vardy, Danny Ings and Aubameyang Involved in Three-Way Race for Premier League Golden Boot.

Man United dominated the major part of the first half and even had two great opportunities to go ahead but Bruno Fernandes failed to properly control a Marcus Rashford cross when clear on goal while Rashford also drew a good save from West Ham goalkeeper Lukasz Fabianski. But it was eventually West Ham, who took the lead after Pogba conceded the penalty leading fans to troll him for his error.

De Gea has been so bad in recent weeks that Paul Pogba has had to take matters into his own hands... literally.

"The one in charge of the VAR is not Stevie Wonder."

Pogba After the Game

Pogba on his way home tonight knowing he can transfer request because they bottled Champions League pic.twitter.com/2Lr4OOySPJ

Ole to Pogba at halftime: pic.twitter.com/cKxh1NVjtJ

Paul Pogba Taking Matter On His Own Hands

Paul Pogba taking matters into his own hands. pic.twitter.com/K10IffshFv

Pogba When the Free-Kick Was Given

Pogba when the free kick came in pic.twitter.com/aKx7p1bjn5

Pogba knew De Gea will mess up and he had to take the matter into his hands.. #MUNWHU Ngige pic.twitter.com/YbaD2RQovU

Who Needs Goalkeeper When You Have Paul Pogba

Pogba Lives By What He Says

Roy Keane On His Way to Talk About Paul Pogba

Roy keane on his way to talk to paul pogba pic.twitter.com/P8jFElN3ZC

Pogba initially looked to have been shielding his face from Declan Rice’s shot but replays suggested that the ball was some metres far from his face when he handled it. New VAR rules also state that handling of the ball inside the penalty box will result in awarding a penalty to the opposition. The referee awarded a straight penalty and VAR replays further asserted that it was a handball.

Meanwhile, a win against West Ham at Old Trafford will take Man United to third in the points table ahead of Chelsea’s away match to Liverpool. A win will also mean United can finish in the top-four and qualify for the Champions League football for next season.

(The above story first appeared on LatestLY on Jul 23, 2020 12:08 AM IST. For more news and updates on politics, world, sports, entertainment and lifestyle, log on to our website latestly.com).