How to Watch the Free Live Streaming Online and Football Score Updates of Manchester United vs Southampton, EPL 2018-19 Football Match? 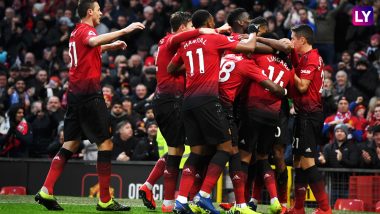 Marcus Rashford came off the bench to play a few minutes against Crystal Palace which would have given the fans a lot of encouragement particularly after his injury scare against Liverpool. The English forward will join two goal hero of the last game Romelu Lukaku in the attack along with Alexis Sanchez whose days at the club appear numbered. The home team have a first choice pairing of Victor Lindelof and Chris Smalling in good form which is crucial for the. There is no good news from the club’s medical team with a host of first-team stars set to miss the Southampton game as well.

Southampton will be without the influential Danny Ings whose thigh trouble keeps him out from an Old Trafford visit. James Ward-Prowse will be in the side once again after excelling in the last few games with Mario Lemina missing. Maya Yoshida will be tasked to keep a check on Lukaku and Rashford and he can expect a busy day at work. Shane Long is set to partner Nathan Redmond in attack to cause the home side a few anxious moments. Manchester United is expected to win convincingly against Southampton given their track record against the Saints and also the domestic form.

In the English Premier League (EPL), Manchester United and Southampton on March 02, i.e. Saturday. The football game will take place at the Old Trafford, with the start time of 08:30 pm (IST).

Where to Watch the Live Telecast of Manchester United vs Southampton, EPL 2018-19 Football Match?

How to Watch the Free Live Streaming Online and Football Score Updates of Manchester United vs Southampton, EPL 2018-19 Football Match?

If you are looking where you can watch the online streaming of the match, then you can log on to Star Sports' live streaming service, i.e. Hotstar. You can also catch Manchester United vs Southampton live football score updates on LatestLY, by clicking here.

(The above story first appeared on LatestLY on Mar 02, 2019 06:33 PM IST. For more news and updates on politics, world, sports, entertainment and lifestyle, log on to our website latestly.com).