Sancho has been linked with a move to Manchester United for a very long time now and this time, it appears that the transfer might be successful. 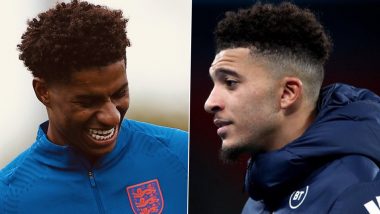 Marcus Rashford teased England teammate Jadon Sancho's much-anticipated move to Manchester United, with a tweet, which he deleted later on. Sancho has been heavily linked to a move to the Premier League since last year and this time, a deal between Borussia Dortmund and Manchester United looks to be more likely with both clubs reportedly agreeing to a transfer fee. A fan asked Rashford about Sancho's move saying, "Announce Sancho, Marcus." Rashford, in response to the tweet, "Yes x."  While fans went wild over this announcement, Rashford once again tweeted that his account had been hacked with someone who had reportedly gotten access to his login credentials. "A little hack and I’m back. Morning all," he wrote, after England pulled off a memorable win over Germany in the round of 16 in Euro 2020. England Cricketers Celebrate Harry Kane’s Goal Against Germany in Euro 2020, Watch Video

A little hack and I’m back. Morning all ♥️🏴󠁧󠁢󠁥󠁮󠁧󠁿

Sancho, currently a part of England's squad in Euro 2020, hasn't yet played in the competition so far. It is expected that Sancho's transfer to Manchester United would be announced after the Euros.

(The above story first appeared on LatestLY on Jun 30, 2021 05:33 PM IST. For more news and updates on politics, world, sports, entertainment and lifestyle, log on to our website latestly.com).