Marcus Rashford scored the only goal of the match against Switzerland to help England win at King Power Stadium. 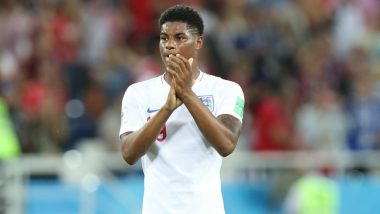 Leicester (England), September 11:  Marcus Rashford scored early in the second half here to give England a 1-0 victory over Switzerland in a friendly match three days after they lost 1-2 to Spain in the UEFA Nations League.

Roughly 30,000 spectators were on hand at King Power Stadium here on Tuesday in hopes of seeing a performance more like the ones that carried England to the semi-finals of the 2018 World Cup, reports EFE news agency. FIFA World Cup 2018: 'We Believe', Wayne Rooney Praises England Football Team

Yet the squad showed no sign of having fixed the problems that plagued them against Spain at Wembley, while an England blunder in their own end would have given the Swiss the lead in the 6th minute if Xherdan Shaqiri's shot hadn't hit the post. England's only scoring chances in the first half came on set pieces, but neither Eric Dier, Rashford nor Trent Alexander-Arnold succeeded with their free kicks.

Eluding two defenders, Mario Gavranovic nearly scored for Switzerland just before the break, but his shot from a poor angle posed no real challenge to England keeper Jack Butland.

England's breakthrough came in the 53rd minute when a corner kick found Kyle Walker and he redirected it toward the far post where an unmarked Rashford was waiting to put the ball past Swiss keeper Yann Sommer for what would prove to be the match winner. Rashford also scored England's only goal in the loss to Spain.

(The above story first appeared on LatestLY on Sep 12, 2018 05:10 PM IST. For more news and updates on politics, world, sports, entertainment and lifestyle, log on to our website latestly.com).