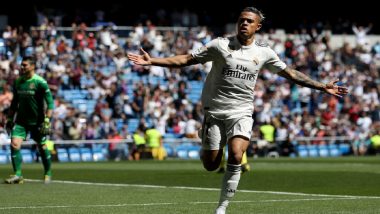 Madrid, July 28: Spanish giants Real Madrid on Tuesday confirmed that striker Mariano Diaz tested positive for COVID-19 following latest round of tests carried out by the club on Monday. The recently-crowned LaLiga winners revealed the 26-year-old has put himself under self-isolation at home but also stated that he remains in 'perfect health'.

"After the COVID-19 tests carried out yesterday on our first team footballers by the Real Madrid Medical Services, our player Mariano, tested positive," Real Madrid said in a statement uploaded on their Twitter handle. "The player is in perfect health and is complying with the protocol of isolation at home," it added. Diaz's positive test comes just days before Real Madrid's UEFA Champions League clash against Manchester City at the Etihad Stadium on August 7. Real Madrid vs Villarreal: Mariano Diaz’s Brace Returns Los Blancos to Winning Ways in La Liga.

Real are currently trailing 1-2 in the Round of 16 following their first leg defeat at Santiago Bernabeu before coronavirus stoppage in March. It is likely that 22-year-old Serbian striker Luka Jovic will have some role to play in the potential absence of Diaz against City. He played only a bit part role in Real's league win this season after securing a move from Eintracht Frankfurt in the summer transfer window.

Star striker Karim Benzema will once lead the line in clash, having been the force behind Real juggernaut this season. He scored 21 goals in the league to help the team win their first LaLiga title since 2017 and 34th overall.

(The above story first appeared on LatestLY on Jul 28, 2020 08:17 PM IST. For more news and updates on politics, world, sports, entertainment and lifestyle, log on to our website latestly.com).