Allegri, in his first spell with Juventus based club won a total of five Serie A titles from 2014-2019. The 53-year old had departed the Turin club in 2019 with Maurizio Sarri replacing him. 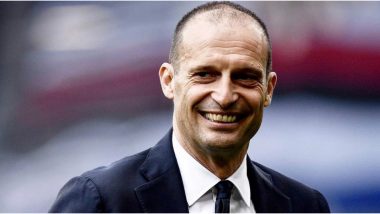 Massimiliano Allegri, according to reports in Italy is all set to become the Juventus manager with Andrea Pirlo set to be sacked on Thursday. Allegri, in his first spell with the Turin based club won a total of five Serie A titles from 2014-2019. He was earlier rumoured to be joining Inter with Antonio Conte departing the club after helping them win their first Scudetto in 11 years.  Cristiano Ronaldo’s Diminishing Role at Juventus a Indication That Bianconeri Are Preparing for Life After Portuguese Star

Massimiliano Allegri is set to join Juventus! The agreement is now ‘imminent’ and Andrea Pirlo will be sacked in the next hours. ⚪️⚫️ @SkySport

The 53-year old had departed Juventus in 2019 with Maurizio Sarri replacing him. Following a disappointing season where they somehow managed to finish fourth and secure a Champions League berth, Pirlo is set to be relieved of his duties. Pirlo did manage to win the Supercoppa Italiana and Coppa Italia this season. Did Cristiano Ronaldo Hint At Juventus Exit Amid Transfer Rumours In His Latest Instagram Post?

But this decision is said to be have been made keeping in mind the lack of progress for the Turin side in the past two seasons. Allegri is also reportedly said to have agreed on a three-year contract with Juventus. An official announcement is likely to follow soon.

(The above story first appeared on LatestLY on May 27, 2021 04:32 PM IST. For more news and updates on politics, world, sports, entertainment and lifestyle, log on to our website latestly.com).