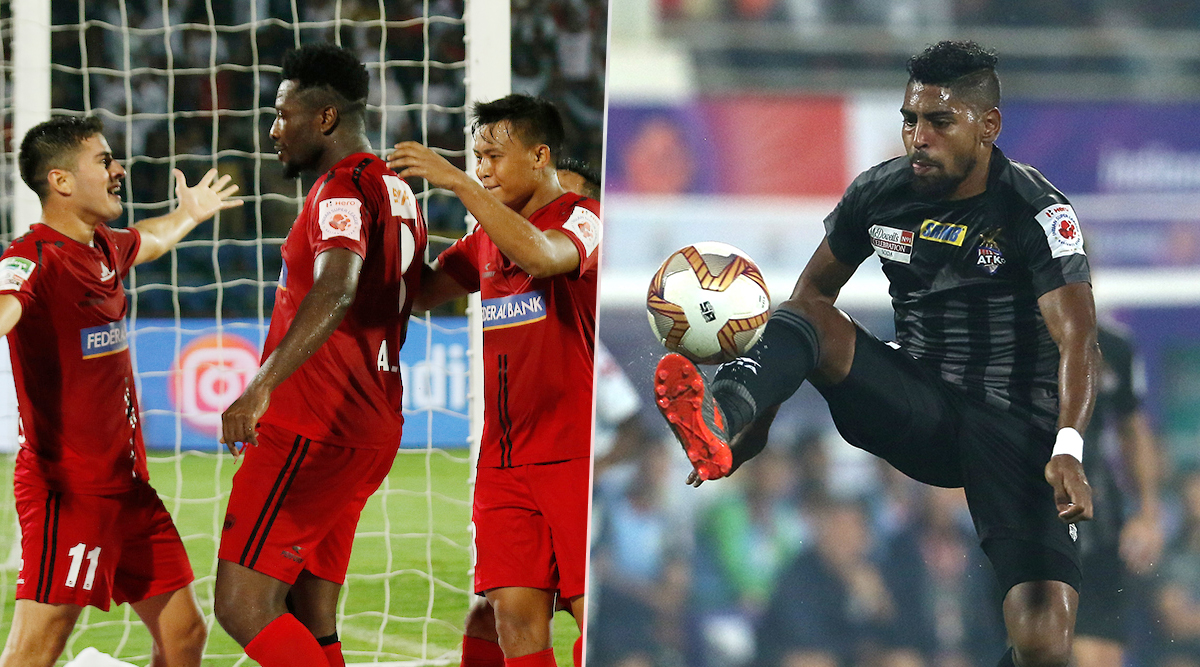 NEUFC vs ATK Head-to-Head Record Ahead of ISL 2019 Clash and Match Results: NorthEast United will host two-time winners ATK in a top of the table clash in 2019-20 Indian Super League (ISL). NEUFC vs ATK encounter in ISL 6 will be played at the Indira Gandhi Athletic Stadium in Guwahati on December 07, 2019 (Saturday). ATK lead the head-to-head records with five victories, while NorthEast United have won three games. The two-time champions started their ISL campaign with an entirely dominating record before the Highlanders bounced back with three wins, including one at the former’s home last season. Take a look at the results of last five encounters between NorthEast United FC and ATK in the Indian Super League. NorthEast United FC Vs ATK FC - Live Football Score.

NorthEast United are undefeated in ISL 2019-20 – the only unbeaten team apart from Bengaluru FC – but have drawn four times in six ISL 6 matches. Robert Jarni’s side have squandered leads in three of those four drawn games and have only beaten newly reinstated teams Odisha FC and Hyderabad. They are placed fourth in the ISL points table and can displace ATK with a win at home. A victory by a margin of three goals will send them top of point standings. NEUFC vs ATK Dream11 Prediction in ISL 2019–20: Tips to Pick Best Team for NorthEast United FC vs ATK.

ATK though needs no such margins and will need a win to pip Bengaluru FC and regain their top spot in the points table. Antonio Habas’ side have 11 points from six games with three wins, two draws and one defeat. Both of their draws have come in successive games in their previous two matches.

A game of wasted opportunities, lack of creative players and a disappointing goalless drab. The goalless draw also summed up the season ATK has under Steve Coppell drawing. Losing and winning six each and were out of the contention of ISL play-offs by the time this match came. NorthEast United, on the other, held them and made to their maiden ISL semi-finals.

Rowlin Borges scored the winning goal with a thumping header from a Federico Gallego corner with one minute remaining to hand NorthEast United their first win of the season. This was after ATK defender Sena Ralte has been sent-off in the 32nd minute for two bookable offences inside 12 minutes.

Robbie Keane, then ATK head coach as well as its marquee signing, guided his team to a 1-0 win with a 10th-minute strike. The win was a little moment of happiness in an otherwise disastrous season for the two-time winners. NorthEast too finished their season with a defeat ending at the bottom of the standings.

Portuguese winger Zequinha put ATK ahead in the 73rd minute with a thunderous strike from outside the box after Robbie Keane’s effort has rebounded off a defender. NorthEast United suffered their first defeat under Avram Grant after Joao de Deus had been sacked following a 5-0 drubbing. ATK were then coached by Manchester United coach Teddy Sheringham.

Iain Hume scored a last-minute equaliser for ATK after Nicolas Velez had pounced on a defensive error to put the visitors ahead in the fifth minute. Hume’s goal, his first-ever against NorthEast United, came in the 90th minute after had Helder Postiga had headed the Javi Lara’s dead ball towards goal. The draws helped NorthEast United avoid their fifth straight defeat and ATK went on to win the title –their second ISL trophy.

Both sides have come a long way since goalless drab last year. ATK looks rejuvenated again and are once again title challengers after two aimless seasons. NorthEast United too look a different side under Robert Jarni and with Asamoah Gyan in their ranks, the Highlanders aim to go one step more than last season.