Leicester City are considering a shock move for Barcelona man Philippe Coutinho in the summer with manager Brandan Rodgers also interested in the services of the Brazil midfielder. It is understood that Leicester City are planning a bid of around €20 million to bring the Brazilian back to the Premier League. 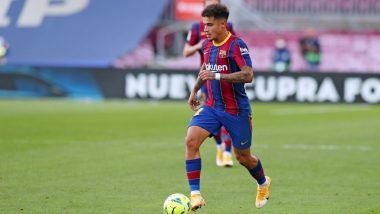 Philippe Coutinho could be on his way back to the Premier League as the Brazil midfielder’s former manager Brendan Rodgers is plotting to bring him to Leicester City in the summer. The former Liverpool star hasn’t enjoyed a great spell in Barcelona, struggling with injuries and form and often finding him on the outskirts of the first team. Barcelona Unveil Eric Garcia As Defender Joins From Manchester City On Free Transfer.

According to a recent report from Spanish news outlet Mundo Deportivo, Leicester City are considering a shock move for Barcelona man Philippe Coutinho in the summer with manager Brandan Rodgers also interested in the services of the Brazil midfielder. Barcelona Transfer News: Sergio Aguero Signs For Catalan Giants On Free Transfer.

The Brazilian joined Barcelona in 2018 for a reported fee of €160 million but it is understood that Leicester City are planning a bid of around €20 million to bring Philippe Coutinho back to the Premier League. The 29-year-old has failed to replicate his best form in Catalonia and the Spanish side are willing to let him go.

Barcelona are under huge debt and are preparing for a mass exodus in the summer to reduce their wage bill and balance the books which could see Philippe Coutinho make way even if the Catalans have to take a significant loss in the fee they initially paid for the Brazilian. It is understood that Barcelona are also considering loaning the Brazilian, which Leicester seem to be content with

Philippe Coutinho previously played under Brendan Rodgers during their time together at Liverpool and the Irish manager was the one to get the best out of the Brazilian playmaker and a move to Leicester could see the 29-year-old rejuvenate himself.  The Barcelona star scored five goals and registered seven assists in 33 Premier League games under Rodgers when Liverpool narrowly missed out on the title in 2014.

(The above story first appeared on LatestLY on Jun 14, 2021 05:54 PM IST. For more news and updates on politics, world, sports, entertainment and lifestyle, log on to our website latestly.com).