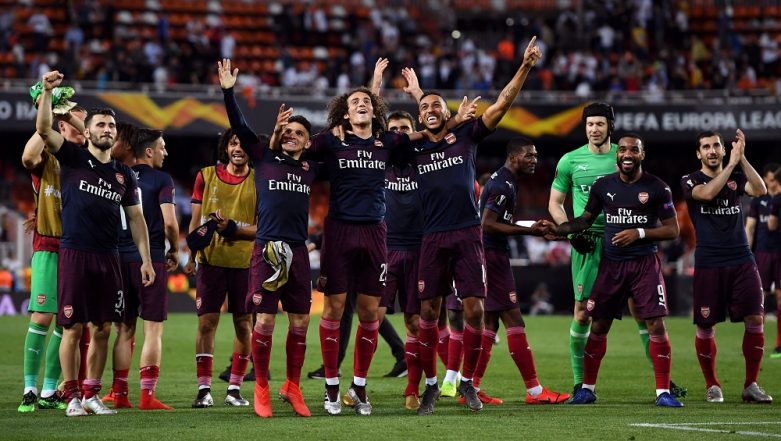 Valencia, May 10: Valencia's hopes of imitating Liverpool and Tottenham Hotspur by mounting a miracle comeback in a European semifinal were shattered by Arsenal's Pierre-Emerick Aubameyang, whose hat-trick propelled the Gunners into the Europa League final. On Thursday, Alexandre Lacazette also scored to make it 4-2 for Arsenal on the night and 7-3 overall. The dynamic duo accounted for all of the Gunners' goals in the tie, reports Efe news.

Valencia, buoyed by the enthusiasm of their supporters, started the contest on the front foot, apparently confident of overcoming their 1-3 loss in the first leg in London. Guedes and Rodrigo combined to get the ball to Kevin Gameiro at the far post and the Frenchman nudged it across the goal line to narrow the deficit to 2-3. Lucas Moura’s Hat-Trick Against Ajax Takes Tottenham Hotspur to Champions League 2019 Final.

The Mestalla erupted and the home side cranked up the intensity. Rodrigo garnered a pair of chances in the space of three minutes, only to hit Gameiro the first time and send the second shot high. The Spanish squad continued to press, but the failure of the Valencia back line to deal with a long ball from Arsenal keeper Petr Cech in the 17th minute led to Aubameyang's first goal.

Conceding took the wind out of Valencia's sails and the Gunners began to enjoy more possession. Yet, Lacazette fired wide when he had an opportunity to settle the contest in the 38th minute and the teams went to the dressing rooms with the score stuck at 1-1 (4-2). Valencia sought to recapture the initiative after the re-start, but instead fell further behind with Lacazette's goal in the 50th minute.

The hosts battled on, however, and Gameiro got his second of the night ahead of the hour mark to make it 2-2 (5-3), lifting spirits at the Mestalla. Arsenal, not known for defending, did enough to prevent Valencia from finding a groove and a Maitland-Niles charge culminated in a cross to the near post where Aubameyang was waiting to strike home.

His team down 3-2 (6-3), Valencia coach Marcelino Garcia Toral pulled Rodrigo and Guedes to rest them for the weekend LaLiga contest against Alaves. Aubameyang completed the hat-trick with a goal in the 88th minute on the counter. With the result, Arsenal manager Unai Emery can dream of adding to the three Europa League titles he won as coach of Sevilla.