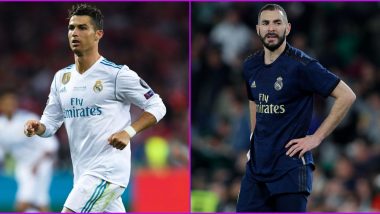 Karim Benzema entered the records books for Real Madrid after the French striker netted a brace during the Los Blancos' clash against Valencia in the La Liga 2019-20. Benzema opened the scoring in Real Madrid's 3-0 win over Valencia in the 61st minute. It was his 242nd goal for Real Madrid in all competitions as he equalled Ferenc Puskas as the fifth all-time top goalscorer for the club. However, towards the end of the game, in the 86th minute, Benzema netted another goal to go past Puskas. Benzema with 243 goals in 503 matches now stands alone at number five. Real Madrid 3-0 Valencia, La Liga 2019-20 Match Result: Karim Benzema and Marco Asensio Volleys Fire Madrid to Victory.

Apart from breaking into top five goalscorers, Benzema also became only the fourth player in the club's history to have scored 20-plus goals in eight or more seasons, he joins the list of players like Cristiano Ronaldo, Alfredo Di Stefano and Raul. Meanwhile, check out the list of top-five goalscorers for Real Madrid.

In La Liga, Benzema equalled Hugo Sanchez's record as well, and the two jointly occupy the fifth spot as far as goals for Real Madrid in the league is concerned. Both have netted 164 goals. Santillana (186), Di Stefano (216), Raul (228) and Cristiano Ronaldo (312) are placed on top four. Benzema joined Real Madrid from Lyon in 2009. The striker after achieving the feat told the club's website, "I didn't imagine anything like this, I'm very happy. I've been working for a long time now, and I always put it in to keep improving."

(The above story first appeared on LatestLY on Jun 19, 2020 11:13 AM IST. For more news and updates on politics, world, sports, entertainment and lifestyle, log on to our website latestly.com).