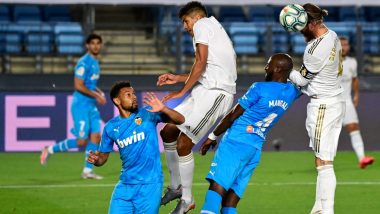 Madrid, June 19: Karim Benzema's volley could well be La Liga's goal of the season and Marco Asensio's was his first touch in over a year as Real Madrid stormed past Valencia 3-0 on Thursday.

Valencia had been the better side in the first half when Rodrigo Moreno hit the post and then had a goal controversially ruled out after referee Jose Sanchez consulted VAR.

Yet Madrid found a different gear after the break to carve out an impressive victory that reduces their deficit to two points behind Barcelona, who play away at Sevilla on Friday. Benzema's stunning second goal that saw him take the ball out of the air with one foot and then volley home with the other was a breathtaking moment that came shortly after a dramatic one for Asensio too.

Asensio has not played since June 10 last year after suffering an anterior cruciate ligament injury but the 24-year-old announced his return in style, volleying in with his first touch, 31 seconds after coming on.

"It's been many months of hard work and I'm very happy to play again and to score," he said afterwards. "I feel a lot of emotion, satisfaction. A lot of work has gone into this." "It means a lot to him," said coach Zinedine Zidane. "We're just happy to see him on the pitch again." But with nine games to go in the title race, Benzema appears key, particularly as his partnership with the resurgent Hazard continues to flourish.

This was his 243rd goal for Real Madrid in all competitions, putting him above Ferenc Puskas into fifth in the club's all-time list. "Benzema's goal was truly an amazing," Zidane said. "The volley, the way the ball fell, with his left foot...I'm happy for him."

In fact, he twice looked for Hazard in the first half too keenly, the first time on the break when he played back inside with Fede Valverde was free outside him.

After a strong start, Madrid faded and Valencia came on strong. They hit the post when Maxi Rodriguez's pass sent Rodrigo clear, his shot was diverted by the fingertips of Thibaut Courtois.

Valencia then thought they had scored as Carlos Soler's pass to the back post beat both Maxi and his marker Raphael Varane to find Rodrigo, who tapped in.

But VAR persuaded Sanchez that Maxi's heel was offside and also that the ball had feathered his foot on its way through. Rodrigo opened the palms of his hands in disbelief.

Benzema tried to nod down for Hazard when he would have been better going for goal but Madrid had lost their purpose and were grateful for half-time.

They were better in the second half, with more control. Kevin Gameiro came on for Valencia and his first touch was a costly one, a loose pass to Hazard setting Madrid away.

Hazard played a one-two with Luka Modric and pushed the ball across for Benzema to finish. Asensio came on in the 74th minute after a hug and a smile with Zidane. His first touch was a glorious one as Ferland Mendy beat Daniel Wass to the line and chipped a pass back to his teammate, who punched a superb volley into the net with his left foot.

An incredible moment could only be surpassed by something special, which Benzema delivered. Asensio crossed and Benzema lifted the ball in the air over Hugo Gillamon with his right foot and then with his left, banged it into the top corner. Valencia were dead and buried and Lee Kang-In was sent off after three frustrated hacks on Sergio Ramos. He departed with one minute left.

(The above story first appeared on LatestLY on Jun 19, 2020 08:50 AM IST. For more news and updates on politics, world, sports, entertainment and lifestyle, log on to our website latestly.com).