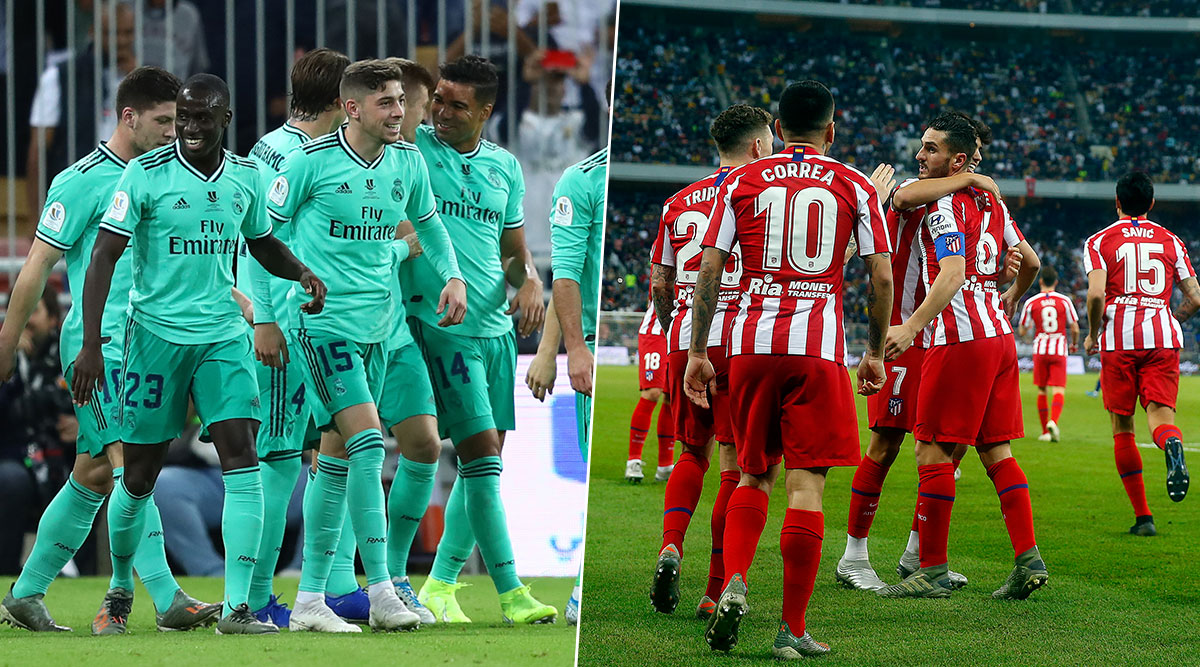 Real Madrid and city rivals Atletico will chase their first title of the season when they face each other in the final of 2019-20 Supercopa de Espana in Saudi Arabia on January 13, 2020 (Monday) as per Indian time. Real, a 10-time winner of the competition, beat Valencia 3-1 to reach the final while derby rivals Atletico fought back from a goal down to defeat FC Barcelona 3-2 and reach the final. Billed as the ‘Madrid derby away from Spain’ Real vs Atletico match in 2019-20 Spanish Super Cup final will be played at the King Abdullah Sports City in Jeddah, Saudi Arabia. Real Madrid and Atletico have so far faced each other in 222 matches with Real Madrid leading the head-to-head (h2h) record with 110 victories while Atletico have won 56 and another 56 matches have ended in draws. Ahead of their summit clash, take a look at results of last 5 RM vs ATL encounters.

Both teams have already faced in the first Madrid derby of the 2019-20 season which ended in a feisty goalless draw. This, however, will be a domestic cup final with result bound to be determined through shootouts if not through open play. Both sides are missing some key players through injuries but looks in form ahead of the final.

Both Real Madrid and Atletico are missing their first-choice strikers Karim Benzema and Deigo Costa but their midfield have copped well in their the absence of the star forwards. Of the combined six goals scored in the semi-finals by Real and Atletico, five were scored by the midfielders. Take a look at the results of the last 5 Real Madrid vs Atletico Madrid encounters.

Both sides remained unseparated after 90 minutes of wasteful football. Real Madrid certainly looked the better side and should have won but Atletico Madrid goalkeeper Jan Oblak kept his side in the match with two terrific saves while Real forward Gareth Bale missed a sitter six-yards out from goal. Atletico slowly grew into the game but lacked the final edge and shot on target only once.

A club friendly transformed into a tournament to make it more attractive and more appealing to the fans. Atletico Madrid thrashed Real 7-3 with Diego Costa scoring four – including a first-half hat-trick before getting a straight red for an off-the-ball tussle with Dani Carvajal who was also sent-off. Joao Felix, Angel Correa and Vitolo scored the other goals for Atletico. Nacho, Benzema and Javier Carrera netted for Real. It was only a friendly said Zidane after the humiliation.

Casemiro put Real ahead in the 16th-minute but Antoine Griezmann levelled for the hosts inside the next minutes. Sergio Ramos then put Real back on the front and Gareth Bale double the lead. Atletico’s chances were killed when Thomas Partey was sent-off 10 minutes from the whistle.

7 yellow cards – 4 to Real – was issued in 90 minutes of Real Madrid vs Atletico Madrid football match. 24 fouls were made with Real making 17 of those. The match had just 9 shots on target and was a scrappy goalless draw.

Diego Costa put Atletico Madrid ahead in the UEFA Super Cup in the opening minute but Karim Benzema levelled the scores in the 27th minute. Sergio Ramos then Real ahead in the 63rd minute but Costa struck again – 16 minutes later. Saul Niguez and Koke scored in extra-time to win it for Atletico.

Real Madrid last won the competition back in 2017 while Atletico’s last victory in the tournament came in 2014 when they beat Real Madrid 2-1 on aggregate. The format of the tournament has changed from two-team to a four-team tournament. Atletico are chasing their third title, while Real will be fighting for an 11th title.