Robert Lewandowski Admits to Having a ‘Feeling of Sadness’ After Missing Out on Ballon d’Or 2021 Title, Hopes That Lionel Messi’s Supportive Words Were Genuine

The Polish striker had been one of the favourites for the title after two prolific seasons but it was Lionel Messi, who eventually walked away with his seventh title. "The mere fact that I was able to compete with him shows me the level that I was able to reach," Lewandowski said. 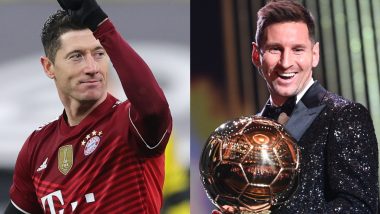 While Lionel Messi was all smiles and on top of the world after winning a record seventh Ballon d'Or title in a glittering ceremony in Paris, Robert Lewandowski let out a grin and potentially felt bad at missing out on the title in a year where he has been nothing short of prolific and exceptional. Well, he has now come forward, admitting that he had a “feeling of sadness” after not being awarded the Ballon d'Or 2021 title and also hoped that closest competitor Lionel Messi's words of compassion was sincere.  One of the few things that Messi rightfully mentioned after winning the Ballon d'Or 2021 title was about Lewandowski. Thomas Muller Rants About Lionel Messi Winning Ballon d’Or 2021, Says Award Was Disappointment

The PSG star acknowledged the Polish striker's achievements and also said that Lewandowski should be given the 2020 Ballon d'Or title. "I would like to mention Robert Lewandowski, it’s been a real honour to compete with you. Everyone knows and we agree that you were the winner last year. I think France Football should award you your 2020 Ballon d’Or - you deserve it and you should have it at home," Messi had said.

Lewandowski, while reacting to missing out on the Ballon d'Or title, said, "I can't say I was happy, on the contrary. I have a feeling of sadness. To be so close, to compete with Messi, of course, I respect how he plays and what he has achieved. The mere fact that I was able to compete with him shows me the level that I was able to reach.” Lionel Messi Reposts Picture of Seven G.O.A.Ts in Front of Paris’ Eiffel Tower After Winning Record Ballon d’Or Title (See Post)

As a matter of fact, Lewandowski not winning the Ballon d'Or 2021 title was a topic that was widely debated in the football fraternity. But the Bayern Munich striker, who was presented the Best Striker award, feels that whatever Messi had said was sincere and not just words. He said, as quoted by Kanal Sportowy, "I'm not that enthusiastic about getting the 2020 award. I would like it [Messi's statement] to be a sincere and courteous statement from a great player and not just empty words.”

(The above story first appeared on LatestLY on Dec 07, 2021 09:07 PM IST. For more news and updates on politics, world, sports, entertainment and lifestyle, log on to our website latestly.com).