The Polish star had a sensational 2021 where he scored 69 goals so far in 59 matches. He missed out on the Ballon d'Or award but was given the Maradona Award and named 'Tiktok Fans’ Player of the Year' at the Globe Soccer Awards. 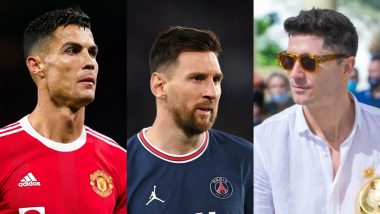 'Who is better-Lionel Messi or Cristiano Ronaldo?'--this age-old question has time and again produced several answers with many pitting either the Argentine or the Portugal star to be the best in world football. But Robert Lewandowski has seemed to come up with an epic response when he was asked to pick who among these two modern-day greats were better. His response was, “I choose Lewandowski," as he was quoted saying at an interview in Expo Dubai. The Polish striker has emerged as one of the world's best and he was involved in a very close competition with Lionel Messi in the race to the 2021 Ballon d'Or title. Cristiano Ronaldo's Statue Installed in Panaji, Goa To Motivate Younger Generation to Take Up Football

Eventually, it was Messi who bagged the top prize for a record seventh time while many raised questions about this decision, stating that Lewandowski should have had the award as he was coming on the back of a wonderful season behind him with Bayern Munich. Last year, the Ballon d'Or awards were cancelled owing to the COVID-19 pandemic, with Lewandowski being the favourite to win it. Even Messi, in his speech after winning Ballon d'Or, said that France Football should give the award from last year to Lewandowski. He did win two titles at the Globe Soccer Awards in Dubai two days ago--the 'Maradona Cup' and the 'Tiktok Fans’ Player of the Year' awards.

While reflecting on the Ballon d'Or title, which he now missed for two consecutive seasons, he shared, "I've had so many questions about the Ballon d'Or.  Last year they cancelled it, I couldn't go, I won everything I could win. This year I scored 69 goals in one season, so you know…" Vinicius Junior, Thibaut Courtois, Eduardo Camavinga and Federico Valverde Test Positive for COVID-19, Real Madrid Issues Club Statement

He also added that he was proud of his performance, even if that did not win him a Ballon d'Or title. “I did everything that I could do because in the Champions League against PSG I was injured, I couldn't play. But with my performance, with myself, if I stand in front of the mirror, I can say to myself, ‘You did everything that you can, you scored 69 goals, you won the German league and you can be proud of yourself.’ I respect other players because they are great players, but I know that for me it's important to be myself and think always positively," he added. Kylian Mbappe Vows To Stay Focused With PSG This Season While Eyeing Champions League Glory

Lewandowski has continued his terrific goalscoring form this season as well, finding the net for a total of 19 goals in 17 Bundesliga games. This year, he has scored 69 goals so far in 59 matches. His performance has been crucial in Bayern Munich securing a nine-point lead at the top of the Bundesliga 2021-22 points table.

(The above story first appeared on LatestLY on Dec 30, 2021 12:04 AM IST. For more news and updates on politics, world, sports, entertainment and lifestyle, log on to our website latestly.com).