Russia and Poland were set to face each other in the playoff rounds on March 24 in an attempt to book a place at the tournament in Qatar but Poland will now go through to the next round after receiving a bye. 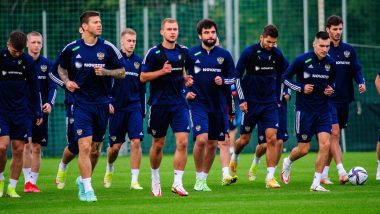 Amid the ongoing crisis between Russia and Ukraine, the Russian national football team have been disqualified from FIFA World Cup 2022 Qualifiers. They were set to play Poland in the playoffs but the Robert Lewandowski-led team have been given a bye and will automatically advance to the Path B final where they will play the winner of Sweden vs Czech Republic to book a place at the showpiece event in Qatar. Russia-Ukraine Conflict: Russia Banned from FIFA World Cup 2022 in Qatar.

‘The Bureau of the FIFA Organising Committee decided that Poland will receive a bye to the final of Path B due to take place on 29 March 2022, in which they will face the winners of the match between Sweden and the Czech Republic’ FIFA said in an official statement.

Russia had finished second in their FIFA World Cup Qualifying 2022 group behind Croatia. Meanwhile, Poland secured a second-place finish in Group I after England emerged as the group winners. Both teams were set to face each other in the playoff rounds on March 24 in an attempt to book a place at the tournament in Qatar but Poland will now go through to the next round after receiving a bye.

Amid the ongoing war between the nations, Russia have been banned indefinitely from international competitions, and their clubs are not allowed to participate in UEFA events as well. Spartak Moscow, who topped their Europa League group, were kicked out of the knockout stage.

However, the Russian Football Union (RFU) has appealed to The Court of Arbitration for Sport (CAS) against the decisions by FIFA and UEFA to bar Russian teams from international competitions over the country's invasion of Ukraine.

In addition, FIFA announced that the 2022 World Cup playoff match between Ukraine and Scotland, scheduled in March, will be postponed to the June window. The winner of this tie will face Wales and Ukraine in the Path A final.

(The above story first appeared on LatestLY on Mar 09, 2022 10:11 AM IST. For more news and updates on politics, world, sports, entertainment and lifestyle, log on to our website latestly.com).