Playing against Lebanon in Asia's second round of 2022 World Cup qualifying, Son scored the winning goal for his side. After scoring the goal, he ran to the cameras and was heard saying, "Chris, stay strong, I love you." 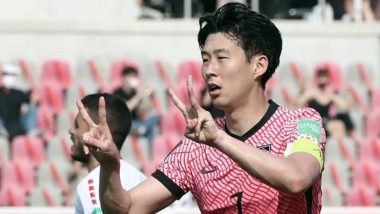 South Korean football star Son Heung-min on Sunday dedicated his goal to former Tottenham Hotspur teammate Christian Eriksen, who suffered from a cardiac arrest during the Denmark-Finland match at the Euros, on Saturday. The midfielder collapsed to the field during the match and was given instant treatment, probably due to which he left the stadium in a stable state. Christian Eriksen Health Update: Danish Footballer Sends Out First Public Message After Cardiac Arrest, Says ‘I Won't Give Up’

Playing against Lebanon in Asia's second round of 2022 World Cup qualifying, Son's side fell behind as early as in the 12th minute from a strike by Sony Saad. South Korea reduced the deficit in the second half courtesy of a Song Min-Kyu header. And the Spurs forward made no mistake in putting his side ahead from the spot in the 66th minute. After scoring the goal, he ran to the cameras and was heard saying, "Chris, stay strong, I love you."

I Love this side of football, absolute class seeing the likes of Lukaku, Sonny & the whole football community come together in support. #Eriksen

This goal was also special because it was his first for South Korea since 2019 and it ensured that his country made it to the third round, to be played in September. Earlier, Belgium striker and Eriksen's current teammate at Inter Romelu Lukaku made a similar gesture of support for the Danish midfielder after scoring against Russia in the Euros.

(The above story first appeared on LatestLY on Jun 14, 2021 05:56 PM IST. For more news and updates on politics, world, sports, entertainment and lifestyle, log on to our website latestly.com).