The Brazilian Football Confederation (CBF) has approached Pep Guardiola with a view to signing the Catalan as the country's national team manager after this year's World Cup, according to media reports. 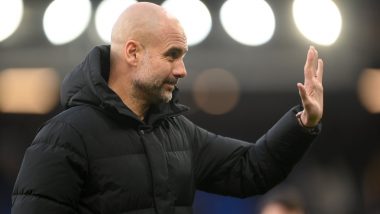 Rio de Janeiro, April 8 : The Brazilian Football Confederation (CBF) has approached Pep Guardiola with a view to signing the Catalan as the country's national team manager after this year's World Cup, according to media reports. The CBF has held talks with Guardiola's brother and manager, Pere, to discuss a proposed four-year deal reportedly worth 12 million euros a year after taxes, according to Brazilian news outlet Globo Esporte.

It added that new CBF president Ednaldo Rodrigues has prioritised the entity's pursuit of Guardiola since his appointment in March, Xinhua reports. The CBF's interest in signing Guardiola has been long known and the Manchester City boss has previously deflected speculation about a possible move to South America by saying the position should be filled by a Brazilian. Brazil's current manager Tite confirmed in February that he would be stepping down after this year's World Cup, to be played in Qatar from November 21 to December 18. Guardiola's contract with Manchester City is due to expire in June 2023. Eintracht Frankfurt 1-1 Barcelona, Europa League 2021-22 Result: Hard Fought Contest Ends in a Draw.

Tite has helped Brazil qualify for two World Cups -- including this year's tournament, to be played from November 21 to December 18 -- and guided them to the 2019 Copa America title as hosts. A former midfielder whose playing days were cut short by knee injuries, Tite has enjoyed a trophy-laden managerial career spanning more than three decades. His most successful spell came in the early-to-mid 2010s, when he led Corinthians to two Brazilian Serie A titles, a Copa Libertadores triumph and a FIFA Club World Cup crown.

(The above story first appeared on LatestLY on Apr 08, 2022 01:28 PM IST. For more news and updates on politics, world, sports, entertainment and lifestyle, log on to our website latestly.com).