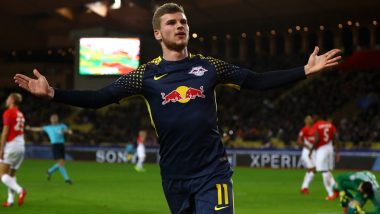 Chelsea and RB Leipzig have reached an agreement over the transfer of German striker Timo Werner. The 24-year-old will remain at the Bundesliga side for rest of the 2019-20 season and will link-up with his Blues team-mates in July. Werner is one of the best strikers in the world at the moment and has joined the Premier League side for a reported transfer fee of £47.5 million. Here's What Chelsea Fans Can Expect From Timo Werner.

Chelsea made the official announcement on June 18, 2020 (Thursday). Timo Werner was one of the most wanted players in Europe, with the likes of Barcelona, Liverpool all wanting to acquire the services of the German international. Chelsea FC Reportedly Makes an Offer of Whopping £120 Million For Cristiano Ronaldo.

We have some @TimoWerner news for you! 👀

The German international has agreed personal terms with the Blues and will join them in July once he passes his medical examination. In his first message for Chelsea fans, Werner said ‘I am delighted to be signing for Chelsea, it is a very proud moment for me to be joining this great club, I look forward to next season with my new teammates, my new manager and of course the Chelsea fans.’

Blues fans, @TimoWerner has a message for you!

The German goal machine also thanked RB Leipzig for their support over the years. ‘I of course want to thank RB Leipzig, the club and the fans, for four fantastic years. You will forever be in my heart.’ He added.

Timo Werner has been spectacular for Leipzig this campaign and has been enjoying his most productive season for them. In 42 appearances, the striker has been involved in 45 goals, scoring 32 times. The Leipzig man is second in the Bundesliga scorer’s chart behind Bayern Munich’s Robert Lewandowski.

(The above story first appeared on LatestLY on Jun 18, 2020 03:22 PM IST. For more news and updates on politics, world, sports, entertainment and lifestyle, log on to our website latestly.com).