Timo Werner Completes Transfer to Chelsea: Here's What Blues Can Expect From the German Striker 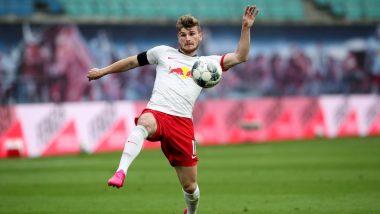 RB Leipzig star man Timo Werner will move to Chelsea after the Premier League side have met the German's release clause. The 24-year-old striker was on the radar of several big clubs around the world but will be moving to Stamford Bridge in the summer. Werner will be joining his Blues team-mates in July once he clears his medical examination. So in this article, we take a look at what the Blues fans can expect from ‘Turbo’ Timo. Timo Werner Transfer to Chelsea From RB Leipzig Complete, German Striker to Join Blues in July.

Timo Werner, who rose through the ranks of VfB Stuttgart, burst on to the scene in his very first season at RB Leipzig, scoring 21 goals in the 2016-17 camping – Leipzig’s first in top fight German league – and helping his side to secure a maiden Champions League berth. The German has continued to improve over the years, and this season has established himself as one of the best striker’s in Europe. Hakim Ziyech Set to Join Chelsea Next Summer.

Timo Werner is enjoying a brilliant campaign, keeping up with the some of the deadliest marksmen in the world and even scoring more league goals than Lionel Messi and Cristiano Ronaldo. The 24-year-old striker is third in the race for European Golden Shoe Award, just behind Robert Lewandowski and Ciro Immobile. The German is one of the best forwards at the moment and here is what Chelsea fans can look for in their reported new goal-machine.

One of Timo Werner’s main quality is his deadly pace which has earned him the nickname ‘Turbo’ Timo. The 24-year-old likes to play on defender’s shoulders, looking to get behind oppositions defence on every opportunity. With Tammy Abraham, being very much a proper number 9, the Blues will have an added dimension to their attack.

One thing that everyone is sure about the striker is his ability in front of the goal. The 24-year-old has scored a total of 32 goals, along with 13 assists in 43 appearances this season. The German has been consistent throughout his spell at Leipzig, only failing to reach the 15-goal mark once his four Bundesliga campaigns, and scoring 20+ goals in two of them.

One of the things Blues fans will be most excited about is the link-up between Timo Werner and Hakim Ziyech. The Moroccan international is very well known at Ajax for his dribbling skills and his inch-perfect balls, piercing the opposition back-line. And as Timo Werner loves balls behind opposition defences, their partnership will surely be key to what Chelsea achieve next season.

Frank Lampard, who took charge of Chelsea earlier this season, has made his mark as a manager who promotes youth and plays high-intensity football. In the German, the Blues are getting a young forward who is willing to work hard for his team, which fits perfectly into the Englishman’s philosophy. The additional bonus being Werner’s blistering pace and his ability to score loads of goals.

(The above story first appeared on LatestLY on Jun 05, 2020 02:02 PM IST. For more news and updates on politics, world, sports, entertainment and lifestyle, log on to our website latestly.com).