Top 5 Hairstyles of Cristiano Ronaldo That Would Make You Drool Over Juventus Star Once Again! (See Pics) 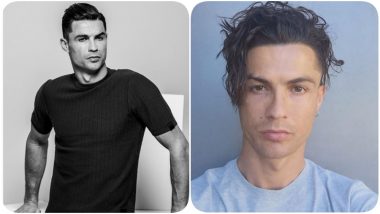 Apart from his game, Cristiano Ronaldo is also known for his looks. The five-time Ballon d’Or winner follows fashion quite closely and makes sure to follow the trends quite closely which often grab the headlines. Ronaldo experiments a lot with his hair. Recently we saw him donning a new look which reminded us of his younger days and the five-time Ballon d’Or winner asked if the netizens if the looks were approved. Needless to say, social media went berserk and gave a thumbs up to CR7. Some of his hairstyles are so good that one actually feels like steaking his look book. Let’s have a look at this top 5 hairstyle that you need to try.

So first up we have this recent look that we just spoke about. In the snap, we Ronaldo have a little longer hair than usual. As mentioned above, it takes you back to his days with Manchester United where he donned a similar look.

Now, this is a kind of an extension to his long hair. Ronaldo appeared to have a man bun during the practice session of Juventus. He must have donned the look to avoid getting disturbed due to his hair. But CR7 looked sexy and pulled off the man bun like a pro!

Sleek pompadour with low side fade

Next up we have his hairstyle which is sleek pompadour with low side fade. This style would remind you of the famous pop star Elvis Presley. Needless to say, the former Manchester United player pulled off the look elegantly.

Always great to see you my friend @faz3

Ronaldo carried this look when he was in Dubai and the retro look suited the footballer. As the hairstyle suggests that the retro would go with formal attire. But the five-time Ballon d’Or winner manages to pull this off in casuals as well.

Now, this twisted faux hawk is quite a common style for Ronaldo. His top hair looks like a crown and the sides will have less or minimum hair. With your hair, you can twist your hair manually to give a perfect look.

That’s all we have for now. If you think that we have missed out on any of your favourite hairstyle of Ronaldo, feel free to leave your comments in the Comments section below. Also, let us know if you have tried any of these looks.

(The above story first appeared on LatestLY on May 29, 2020 03:25 PM IST. For more news and updates on politics, world, sports, entertainment and lifestyle, log on to our website latestly.com).