Gerard Moreno had struck for the Yellow Submarines as early as in the 29th minute but Manchester United clawed their way back into the contest with Edinson Cavani, equallising in the 55th minute. It all went down to penalties at the end of extra-time where Manchester United goalkeeper David De Gea missed the decisive penalty, that set up Unai Emery's side to a win. 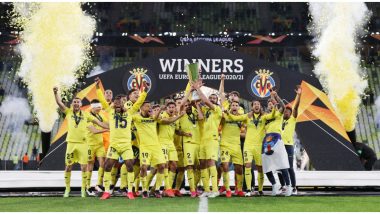 Villarreal on Thursday clinched their first major European trophy by defeating Manchester United in the UEFA Europa League 2020-21 final at the PGE Arena in Gdansk. It took a very long and memorable penalty shootout to separate these two sides after they ended 1-1 at the end of extra-time. Manchester United keeper David De Gea missed the decisive penalty, with his shot being saved by opposition counterpart Geronimo Rulli and that set up the La Liga side for a win. Villareal Edges Out Manchester United During Penalty Shoot-Out to Clinch Maiden Europa League 2020-21 Title, Watch Goal Highlights

Gerard Moreno had struck for the Yellow Submarines as early as in the 29th minute but Manchester United clawed their way back into the contest with Uruguayan striker Edinson Cavani, equalising in the 55th minute. With this win, Unai Emery now has won a fourth Europa League trophy in his sixth final appearance in this competition while Ole Gunnar Solksjaer still has to wait for getting his hands on a trophy as Manchester United manager since taking over in 2019.

Here is how Twitter reacted to this epic final:

Unai Emery has won every single Europa League final, except the one with Arsenal pic.twitter.com/J55AYXU8LW

Bruno Fernandes at 30 was playing in the Europa League final like #EuropaLeagueFinal pic.twitter.com/eMxL88qilk

Greenwood was sub for Fred despite being in the game....

Van deek can't get a game despite Pogba, Bruno not being in the game...

Ole is the best thing to happen to United dey said.

The game was an evenly poised one with nothing to distinguish between both Villarreal and Manchester United. Both sides had almost the same shots attempted with United having two shots on target and Villarreal with one. Manchester United dominated most of the possession with 61% as compared to Villarreal's 39%. Corner-wise, it was Emery's side which had more opportunities with seven while United managed just three corners. Both sides also received two yellow cards each.

(The above story first appeared on LatestLY on May 27, 2021 09:31 AM IST. For more news and updates on politics, world, sports, entertainment and lifestyle, log on to our website latestly.com).