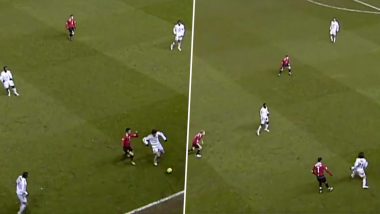 Andrea Pirlo replaced Maurizio Sarri as Juventus’ manager following the club’s exit in UEFA Champions League. The former AC Milan star is regarded as one of the best midfielders of his generation and the Old Lady are expected to thrive under him. Cristiano Ronaldo will undoubtedly be the Pirlo’s star man and it will be interesting to see how the duo will join forces. However, there were times when the Italian legend went head to head with CR7. Following Pirlo’s appointment as Juventus manager, a viral video has been doing rounds of internet in which the former AC Milan midfielder can be seen outfoxing the Portuguese star with his sheer brilliance. Andrea Pirlo Back at Juventus for Another Attempt at Champions League Glory.

Few months ago, the official Twitter accounts of UEFA Champions League shared a video in which Pirlo was seen nutmegging players and piercing the defences with ease. The compilation video also involved a clip where Pirlo sent Ronaldo to the ground with a simple turn. The incident took place during the 2005 Champions League when Pirlo was at his prime while the Portugal star, who represented Manchester United, was in the early days of his career. Have a look. Cristiano Ronaldo Transfer News Latest Update: Juventus Star’s Agent Jorge Mendes to Meet PSG Sporting Director.

Well, the Italian Champions are expected to go back to the winning ways under Pirlo. However, speculations are that Ronaldo might leave Juventus following the failure at Champions League. Well, no official announcement has been made regarding the five-time Ballon d’Or winner’s transfer. So, it will be interesting to see if the legendary striker will continue to serve Juventus or any other club will bag his services.

(The above story first appeared on LatestLY on Aug 10, 2020 10:58 AM IST. For more news and updates on politics, world, sports, entertainment and lifestyle, log on to our website latestly.com).