Andrea Pirlo Back at Juventus for Another Attempt at Champions League Glory, This Time As the Manager

Maurizio Sarri led Juventus to their ninth successive domestic title but failure in the Champions League proved fatal for the 61-year-old as he was relieved of his duties soon after. With yet another ‘high-profile’ manager failing to achieve European success with the Bianconeri, the Italian giants have now turned to club legend Andrea Pirlo. 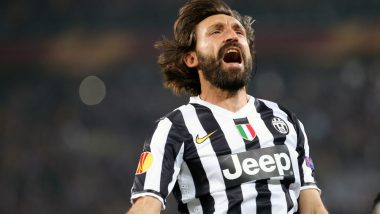 Juventus appointed Andrea Pirlo as their new manager following the sacking of Maurizio Sarri. The decision came after the Bianconeri were knocked out of the Champions League round of 16 by underdogs Lyon. The 41-year-old, who played for the Old Lady between 2011 and 2015, was named as the Under-23 side’s manager just 10 days ago but gets an immediate promotion as the first team boss in hopes of securing European glory. Juventus Sack Maurizio Sarri After Early UEFA Champions League Exit.

Maurizio Sarri led Juventus to their ninth successive domestic title but failure in the Champions League proved fatal for the 61-year-old as he was relieved of his duties soon after. With yet another ‘high-profile’ manager failing to achieve European success with the Bianconeri, the Italian giants have now turned to club legend Andrea Pirlo. Andrea Pirlo Replaces Maurizio Sarri as Juventus New Head Coach.

Juventus in recent years have been the most dominant team in Italy but have always fallen short on the European stage. They last won the trophy in 1996 and since then have come close a few times, most recently, losing in the finals to Cristiano Ronaldo-led Real Madrid in 2017. But hope that their new manager can break the chain

Pirlo is one of the greatest players football has ever seen but this will be his first stint as a manager of a football club. The Brescia-born footballer joined Bianconeri in 2011 when they were going through a rebuilding phase – due to their demotion to Serie B in 2006 – and helped Juventus in regaining their status as an Italian and world football powerhouse.

Before joining Juventus, Pirlo had already achieved everything there was to achieve in football, winning Serie A and Champions League titles with AC Milan and also the World Cup in 2006 with Italy. Though well past his prime when he moved to Turin, the midfield maestro was the leader at a reviving European giant.

With the club now once again in need of a rebuild, Pirlo has again been handed the task of leading the side. The 41-year-old made 164 appearances for the club in his four years as a player, leading them to their first Champions League final appearance since 2003, but fell short against Barcelona in 2015.

Pirlo left Juventus after that loss, playing his trade in the Major League Soccer with New York Cosmos. But the Italian now has returned to Turin and will be eager to deliver the Champions League trophy which eluded him as a Bianconeri player.

(The above story first appeared on LatestLY on Aug 09, 2020 01:20 PM IST. For more news and updates on politics, world, sports, entertainment and lifestyle, log on to our website latestly.com).