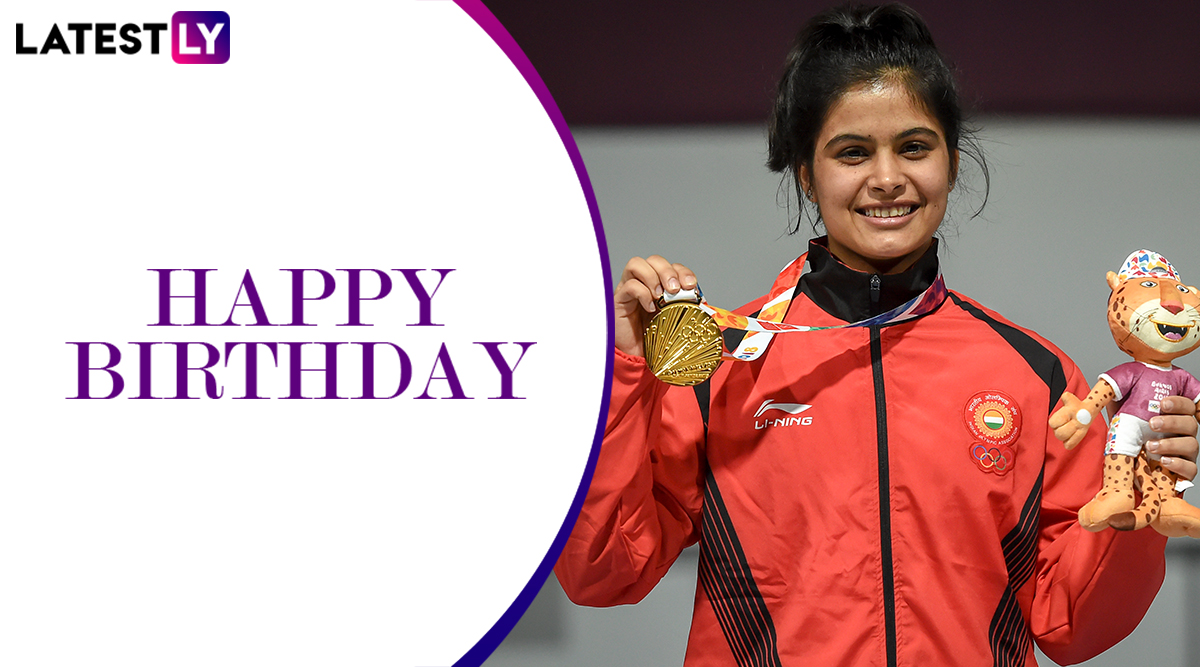 She is the youngest Indian shooter to win a gold medal at the ISSF World Cup. Manu Bhaker was 16 when she beat two-time champion Alejandra Zavala to clinch the gold medal at the 2018 International Shooting Sport Federation (ISSF) World Cup, making her the Indian to do so. Manu Bhaker turns 18 on February 18, 2020 (Tuesday). Bhaker has already secured her qualification for the upcoming 2020 Tokyo Olympics and one of the nation’s biggest medal hopes at the multi-sport event. An airgun shooter by trade, Bhaker has already won gold medals at the Youth Olympics, Commonwealth Games, ISSF World Cup and the Asian Shooting Championships. 63rd National Shooting Championship: Manu Bhaker, Rahi Sarnobat Win Gold Medal As Tokyo 2020 Olympics Quota Winners Continue to Shine.

Bhaker though didn’t start as a shooter. Not that she didn’t excel in whatever else she did. Bhaker represented her state Haryana in multiple sporting events at the national games and returned with medals in most. Until the age of 14, Bhaker played boxing, tennis and skating among other games and excelled in most. But her grandfather Rajkaran Saheb, a shooter in the Indian army, inspired Bhaker to take up shooting. And the rest, as they say, is history. As she celebrates her 18th birthday, take a look at the number of times Manu Bhaker made India proud.

Bhaker had started shooting in 2016 and two years later was competing in women’s 10-meter air pistol event at the ISSF World Cup in Guadalajara, Mexico. Alexandra Zavala, a former World No 1 and multiple times World Cup gold medallist, was the overwhelming favourite and also the local hero. But Manu, who nearly lost her medal with a poor shot in the 17th round, pulled an upset to clinch the gold medal with a 237.5shot in the final round. It made her the youngest Indian and third youngest ever to win a gold at the World Cup.

India’s first-ever gold medallist at the Youth Games. Bhaker, heading into the Youth Olympics, had disappointed at the 2018 Asian Games and the succeeding World Championship event in Incheon. But Bhaker was back to her best in Buenos Aires becoming the first-ever Indian to win a gold at the event. She shot 236.5 the eight-woman final to win the gold.

It was happiness in disappointment at the ISSF World Cup in Munich last year. She finished without a medal in the singles event but achieved qualification for the 2020 Tokyo Olympics. Bhaker shot 201 in the final and finished fourth missing on a medal. But a fourth-place finish was enough for an Olympics qualification.

Just 18, Bhaker has already won medals at multiple sporting events and shattered records in Indian shooting circuit. Her gold medal count (7) at the ISSF World Cups make her the Indian athlete with a joint-most number of gold medals. Saurabh Chaudhary, also 17, has the same number of medal count at the perennial event.