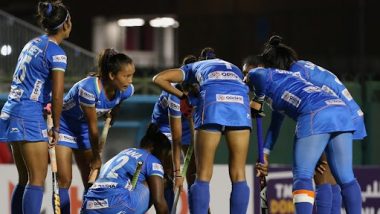 Mumbai, March 29 : The Indian women's hockey team's upcoming FIH Hockey Pro League matches against England have been postponed due to the high number of Covid-19 positive cases in the English team.

The double-header between the men's teams from the two nations will however go ahead and will be played on April 2-3 at the Kalinga Stadium in Bhubaneswar. The announcement regarding the postponement of the Pro League match between India and England women's teams was made by FIH after England Hockey conveyed to them that the women's team would not be travelling to Bhubaneswar for the two matches as "several members of the team have positive for Covid-19 while some were unavailable due to injuries in the squad". Travis Head Scores Century During Pakistan vs Australia 1st ODI 2022 in Lahore.

The two world-class teams taking to the field was hugely anticipated as hockey fans around the globe were looking forward to the Indian women's team and England facing off, according to a release by Hockey India. NZ vs NED 1st ODI 2022: Blair Tickner Takes 4 Wickets, Will Young Slams Unbeaten Ton as Kiwis Score Big Win.

Commenting on rescheduling the India-England women's matches, Hockey India President Gyanendro Ningombam said, "It is unfortunate that the England women's hockey team had to cancel their India trip for the weekend matches in Bhubaneswar. We understand these are challenging times for every team as we all continue to battle the pandemic."

The FIH will now be working with the federations from India and England to decide alternate dates for the two matches. The Indian women's team will next play the Netherlands in a double-header on April 8-9.

(The above story first appeared on LatestLY on Mar 29, 2022 07:08 PM IST. For more news and updates on politics, world, sports, entertainment and lifestyle, log on to our website latestly.com).