As India marked an exit from World Cup 2019, the ad rates for TV are down by almost 50%. There has been a reduced interest from the advertisers, and the current asking rate for a 10-second spot is Rs 10-15 lakhs as against Rs 30-35 lakh last week. 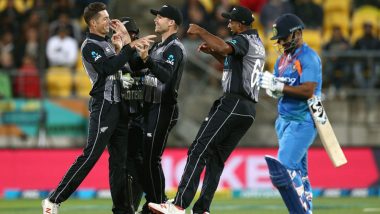 Mumbai, July 12: After India made an exit from World Cup 2019, the last-minute advertisers will now no longer have to pay a premium for a television spot during the ongoing World Cup match. According to a Business Standard report, the ad rates have slashed by over 50 per cent after India lost to New Zealand in the first semi-final on Wednesday.India vs New Zealand Highlights of Semi-Final Match: India Crash Out of ICC Cricket World Cup 2019.

Reportedly, the asking price in the 10 percent inventory available for the final is Rs 10-15 lakh per 10 seconds, lower than Rs 30-35 lakhs, which Star was quoting last week.  The report mentions that the average TV sponsor rates for the cricket World Cup were in the range of Rs 8-10 lakh per 10 seconds spot. However, advertisers did dish out as high as rs 25 lakh per 10 seconds for the India Pakistan match on June 16.

It was seen that as India went to the semi-finals, the ad rates had shot up, so many of the brands did spend generously on the digital platform, which is any day cheaper in comparison to TV.  According to other reports, Hotstar wanted to clock over 200 crores in revenues from the World cup and Star, which is the official broadcaster of ICC World Cup was expecting Rs 1,200-1,500 crore of advertising revenue from television for the tournament. With India not qualifying for the finals, Star India may lose Rs 10-15 crore in advertising revenue.

The World Cup 2019 finals will take place between England and New Zealand.

(The above story first appeared on LatestLY on Jul 12, 2019 12:51 PM IST. For more news and updates on politics, world, sports, entertainment and lifestyle, log on to our website latestly.com).