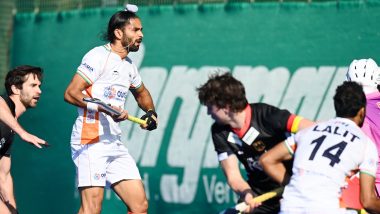 Indian men’s hockey team returned to international action in spectacular style as they defeated Germany 6-1. The Men in Blue were completely dominant in their display, registering a comprehensive win over the sixth-ranked team in the world. India were without regular captain Manpreet Singh and drag-flicker Rupinderpal Singh for this clash but played brilliantly in their absence. Indian Hockey Captain Manpreet Singh Gets Married to his Long-Time Girlfriend Illi Siddique in Jalandhar.

This score-line has us smiling from ear to ear.

Team India were in lockdown for the most part of last year due to the coronavirus pandemic but played some intra-squad matches to keep themselves sharp. However, coach Graham Reid said that it was impossible to produce international-match scenarios during these practice games and matches against Germany and Britain is to get a lot of information about his players, the tactics and their skills.

‘You get some feedback from the internal matches but when you are with the same group for a long time, you lose perspective and objectivity a bit. The objective of this tour is to get feedback of where we are at so we can plan what needs to be done between now and the Olympics,’ Reid said.

(The above story first appeared on LatestLY on Feb 28, 2021 09:15 PM IST. For more news and updates on politics, world, sports, entertainment and lifestyle, log on to our website latestly.com).