As the Birmingham CWG 2022 came to an end, here at Latestly we take a look at India's medal standings and rankings at the Commonwealth Games edition by edition. 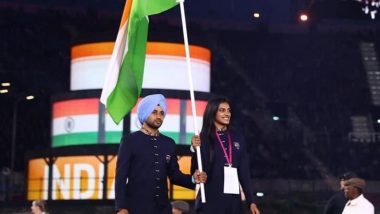 The Commonwealth Games 2022 came to an end in Birmingham. The multi-sports extravaganza lasted for 10 days with mesmerising action on the field. India, without their star athlete Neeraj Chopra, finished their CWG 2022 campaign on a high note. On the final day, India clinched six medals including four gold medals in Birmingham. Indians ranked fourth on the final CWG 2022 medal standings with overall 61 medals. In the 21st edition of the Games, in 2018, India had finished third on the medal table with 66 medals in Gold Coast. India have a long history in CWG as they have participated in 18 out of 22 editions at Commonwealth Games. CWG 2022: 5 Highlights Of India’s Performance at the Commonwealth Games in Birmingham.

India's best ever medal tally was in 2010 CWG in New Delhi where they ranked 2nd on the medal table, having won 101 medals. It was the first time India reached the triple digit mark at the CWG. As the Birmingham CWG 2022 came to an end, here at Latestly we take a look at India's medal standings and rankings at the Commonwealth Games edition by edition. Commonwealth Games 2022 Indian Medal Winners List: Check Updated Full Names of Team India Athletes Who Have Made it to Medals Table of Birmingham CWG.

India’s Medal Standings and Tally Edition by Edition at CWG

Since 2002, India have been performing consistently well in the Games. In the 2002 Manchester Games, India, for the first time, made it to the top five in the medal standings and ranked fourth after winning 69 medals. Since then, India have never been out of the top five in medal rankings. However, after winning 101 medals in the Delhi Commonwealth Games, India's medal counts have been under 70 as they managed to win 64, 66 and 61 medals in the last three CWG editions. India have won 564 medals in total in the history of the Commonwealth Games and rank fourth on the all-time CWG medal table.

(The above story first appeared on LatestLY on Aug 08, 2022 11:36 PM IST. For more news and updates on politics, world, sports, entertainment and lifestyle, log on to our website latestly.com).