CWG 2022: 5 Highlights Of India’s Performance at the Commonwealth Games in Birmingham

India capped off a memorable outing at the Commonwealth Games in Birmingham where the nation finished with a whopping 61 medals. With this rich medal haul, India finished fourth behind Canada and traditional powerhouses England and Australia. 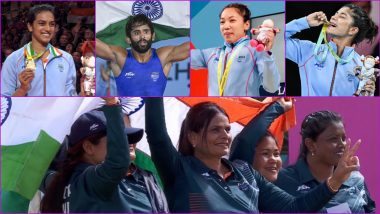 After 10 days of thrilling action and excitement, the Commonwealth Games 2022 in Birmingham have come to an end on Monday, August 8. The competition, much like its earlier versions, was a massive success and speaking specifically for India, it did give a glimpse of what the future of the nation's sports in these tournaments, can look like. The country ended with a total haul of 61 medals, five short of what they had achieved back in 2018 in Gold Coast. Having said that, this time India missed the services of their shooting contingent after the discipline was not included in the competition. Plus, the nation too missed the services of some top athletes like Neeraj Chopra, Mary Kom, Saina Nehwal and Tajinderpal Singh Toor, all of whom were not part of the contingent due to varied reasons. Commonwealth Games 2022 Indian Medal Winners List

Under these circumstances, a fourth-placed finish with a total of 61 medals, out of which 21 are gold, is undoubtedly a very impressive showing. In this article, we shall take a look at the top five highlights for India in the Commonwealth Games 2022:

1) Clean sweep for wrestlers: The wrestling contingent was undoubtedly the most successful of all for India in Birmingham. All 12 participating wrestlers bagged podium finishes. And out of these 12, six of them were gold medallists. It once again goes to show that the day isn't far when India can be reckoned as a global powerhouse in wrestling.

2) Boxing continues to be one of India's strong suit: Boxing remains one of India's strongest areas in the Commonwealth Games. In 2018, Mary Kom had become the first Indian woman to win boxing gold at the Commonwealth Games. This time, Nikhat Zareen stepped up and fulfilled that role perfectly. India also had other gold medallists in the form of the ever-consistent Amit Panghal and rising star Nitu Ghangas. Besides them, Sagar Ahlawat, Rohit Tokas, Mohammad Hussamuddin and Jaismine Lamboriya also bagged medals.

3) Weightlifters rising up to the occasion: India's weightlifters surely did 'lift' the national flag up multiple times at the Commonwealth Games 2022 this year. As a matter of fact, India's early haul in Birmingham began through the weightlifters, who stood up the occasion and did not fail to give India the recognition it deserved in this discipline. Mirabai Chanu, Bindyarani Devi, Sanket Sargar, Jeremy Lalrinnunga and Achinta Sheuli's podium finishes amongst others, remain the most memorable for India at the Commonwealth Games 2022.

4) Badminton stars continue to shine: Badminton has always been a discipline that India have relied on to fetch them medals. This time too, they did not disappoint. Led by the ace PV Sindhu, the Indian badminton contingent experienced massive success in both team and individual events. Sindhu, Sen and the men's doubles gold medal wins remain the highlight of the Indian badminton contingent in Birmingham.

5) Lawn Bowls Success: Not many would have even heard about the sport Lawn Bowls itself before the Commonwealth Games 2022 started. And guess what, India did make their presence loud and clear in this discipline with the women's fours team clinching a rare gold medal in Birmingham. The men's fours team then went on to make an impact with a silver medal in their event.

Women's cricket was introduced at the Commonwealth Games for the very first time and the Harmanpreet Kaur-led team showed grit and courage to score a silver medal win. Yes, they did come agonizingly close to winning the gold but they deserve huge credit for securing the silver medal, which is an achievement in itself.

Barring these, the table tennis contingent too was exceptional with the seasoned Sharath Kamal bagging four medals for the nation. Not to forget, the Indian track and field athletes, who too secured multiple podium finishes for India in Birmingham.

(The above story first appeared on LatestLY on Aug 08, 2022 10:19 PM IST. For more news and updates on politics, world, sports, entertainment and lifestyle, log on to our website latestly.com).