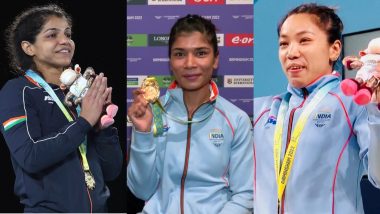 India finished their sojourn in Commonwealth Games 2022 with a whopping 61 medals. After 10 days of non-stop action, India finished fourth on the medal tally after having won a total of 22 gold medals, 16 silver and 23 bronze. Most of India's medals have come from wrestling and weightlifting. Boxing and badminton too did not disappoint alongside the athletes in track and field athletics. Despite the absence of some top stars like Mary Kom and Neeraj Chopra, India managed to cap off a successful Commonwealth Games campaign, this time with many youngsters stepping up to have the country's flag raised on the podium across several disciplines.  Meanwhile, if you want to take a look at the updated list of Indian athletes who have made it to the medal table in Birmingham, you can scroll below. Commonwealth Games 2022 Medal Tally Live Updated.

Sanket Sargar was the one who kickstarted India's medal haul with a silver in the weightlifting 55 kg category. Gururaja Poojary was the next to join him on the list with a bronze in his 61kg event in the same discipline. Mirabai Chanu showed why she was the reigning champion with another gold in her event. Two more gold medals came India's way with Jeremy Lalrinnunga and Achinta Sheuli claiming the top spots on the podium. Bindyarani Devi too would be proud of her performance, which earned her a silver medal in the 55kg event. In wrestling, Sakshi Malik, Bajrang Punia and Deepak Punia all bagged gold medals. Nikhat Zareen, Amit Panghal and Nitu Ganghas headlined India's boxing success while the likes of PV Sindhu, Lakshya Sen, Sharath Kamal and also Sathiyan Gnanasekaran impressed in badminton and table tennis, respectively.  India at Commonwealth Games 2022 Medal Tally Live Updated.

India had ended third on the medal tally in the last edition of the Commonwealth Games on the Gold Coast in 2018. With a total haul of 66 medals that included 26 golds, 20 silvers and 20 bronze. India's best performance, however, remains at the 2010 Commonwealth Games where a total of 101 medals were won by the country's athletes.

(The above story first appeared on LatestLY on Aug 01, 2022 01:41 PM IST. For more news and updates on politics, world, sports, entertainment and lifestyle, log on to our website latestly.com).