The International Lefthanders Day 2022 is celebrated to acknowledge the lefties not only in their uniqueness but also for the struggle they go through in everyday life. From sports to arts, many big names have carried out their services while being left-handed. 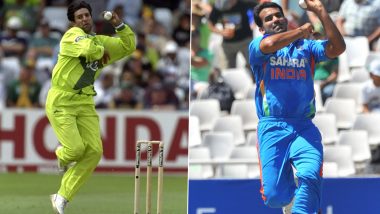 Around 10% of the world's population is left-handed. International Lefthanders Day is celebrated every year on August 13, after a club in 1992 recognised the day for all the southpaws across the globe. The day is celebrated to acknowledge the lefties not only in their uniqueness but also for the struggle they go through in everyday life. From sports to arts, many big names have carried out their services while being left-handed. In cricket, left-handed bowlers or batters have a particular space and are treasured for their distinctiveness and their contribution is reported aloud. Here, on international left handers day let's celebrate some of those left-arm bowlers who ruled the cricketing world over the years.

Zaheer Khan: He was one of the prolific left arm fast bowlers of India. Zaheer Khan is one among only three Indian pacers who took more than 300 wickets in Tests. He had these crafty swing and reverse swing abilities that he exhibited in his bowling, which very few Indian bowlers ever possessed.

Wasim Akram: The former captain of Pakistan, Wasim Akram is considered to be the greatest left-arm fast bowler of all-time in cricket. Akram's mastery at swing and seam would leave the batsman facing him awestruck. Wasim is popularly also known as the King of Swing. His contribution to Pakistani cricket and to the sport itself goes unmatched.

Chaminda Vaas: He was one of the underrated left arm fast-bowlers amongst the counterparts of his era like Brett Lee, Wasim Akram and Glenn McGrath. However, for Sri Lanka he was the top-shelf left-arm pacer. Chaminda Vaas had the expertise to swing the ball in either ways, which would give tough time to the batters. With over 750 wickets in all formats, he has been a valuable performer of his time.

Daniel Vettori: The former Kiwi bowler has a record of being the first left-arm spinner in the history of cricket who has taken 300 plus wickets in both ODIs and Tests. His excellency in speed variation, flight and accuracy as a left-arm spinner made him the best among others.

Mitchell Johnson: The Australian has always been the challenging left-arm fast bowler for the batters for his astonishing speed at which he bowled and the length at which he used to pitch the ball. The muscleman was known for his pacy bouncers and aggressive attacking behaviour. He took 313 wickets in his Test career. Mitchell Johnson was one of the most admired left-arm fast bowlers in Australia.

(The above story first appeared on LatestLY on Aug 13, 2022 07:50 AM IST. For more news and updates on politics, world, sports, entertainment and lifestyle, log on to our website latestly.com).