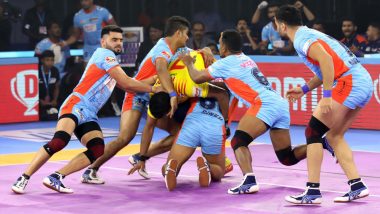 Bengal Warriors is all set to take on U Mumba in the semi-final 2 game of the PKL 2019 at the EKA Arena by TransStadia in Ahmedabad. The winner here makes it to the finale of the mega-event. Before getting on the live streaming details of BEN vs MUM, let’s have a look at the results of the two teams and also the players to look forward to for the upcoming contest. The two teams have locked horns twice in the tournament and both times, it was Bengal Warriors who registered the narrow win. Bengal Warriors Vs U Mumba Live Pro Kabaddi Score Match Semi-Final 2.

In both the games, Bengal Warriors won the game by a narrow margin of two and three points. In the first game, Bengal won the game by 32-30 and the second game at Netaji Indoor Stadium witnessed the same team winning by 29-26. For the Bengal Warriors, it was Maninder Singh who has proven his prowess by registering 200 raid points. The Bengal raider also recorded most Super 10s in a single season. Whereas, Baldev Singh has been the best defender and is on the verge of reaching 100 overall points in the history of Pro Kabaddi League.

Whereas for U Mumba, Abhishek Singh will be the player to watch out for as he just brought up an average of 150 points. Iran’s defender Fazel Atrachali has had 76 successful tackles in the tournament. Now, let’s have look at the live streaming details of the match below:

The match between Bengal Warriors and U Mumba will be played on October 16, 2019 (Wednesday) and is scheduled to start at 8:30 pm IST (Indian Standard Time). The Eka Arena in Ahemdabad will be the venue of the match.

The official broadcaster of VIVO PKL 2019 is Star Sports Network. So, the fans who are willing to enjoy the live Hindi commentary can tune into Star Sports 1, Star Gold and their respective HD channels. While Star Sports 2 and Star Sports 2 HD will present the English commentary.

Several Kabaddi fans might not able to enjoy the BLR vs DEL match on television. They can watch the match through online streaming. On online platforms, the BEN vs MUM match will stream on Hotstar app and hotstar.com.Fans can also follow BEN vs MUM game in season 7 live score updates on LatestLY.

(The above story first appeared on LatestLY on Oct 16, 2019 06:30 PM IST. For more news and updates on politics, world, sports, entertainment and lifestyle, log on to our website latestly.com).