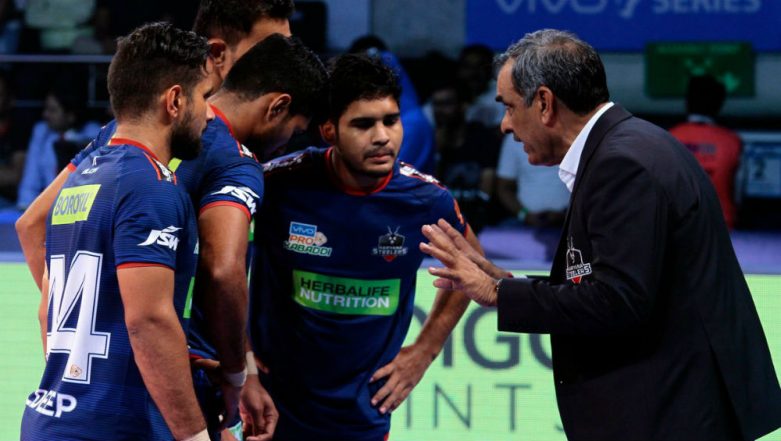 The sixth season of the Pro Kabaddi League (PKL) is nearing its end. On the night of Christmas, it will be Haryana Steelers locking horns with Tamil Thalaivas later today. Also in action will be Bengal Warriors and Telugu Titans, who will be competing in the second match of the night. If you are looking for the live telecast and online streaming details of the PKL matches, then you can find the relevant information here.

In the first match on December 25, it will be Haryana Steelers squaring off against Tamil Thalaivas. Both the teams are bottom placed in respective zones. It will be their final match tonight as both the sides haven’t been able to qualify for the playoffs. Pro Kabaddi League 2018-19 Schedule Timetable: Full Fixtures, All Teams' Match Dates, Timings, and Venue Details of PKL Season 6.

The second match will see Bengal Warriors taking on Telugu Titans. The former has qualified for the playoffs, while the latter would be looking to close the gap with third-placed Patna Pirates. However, even if they win, they will not be able to qualify, unless it is with a significant margin. PKL Season 6 Points Table and Rankings: Puneri Paltan Beat Hyderabad Steelers to Top Points Table.

The 127th match of the Pro Kabaddi League (PKL), Season 6, will see Haryana Steelers and Tamil Thalaivas clashing on December 25, i.e. Tuesday. The contest will take place at Netaji Subash Chandra Bose Indoor Stadium in Kolkata. The game will see a start time of 8.00 pm (IST).

The fans can watch the live match action of Haryana Steelers vs Tamil Thalaivas, on Star Sports 2/HD channels. If they want to see it via online streaming, then they will have to see it on Hotstar. Also, the fans can see the live coverage and updates of the match, by clicking here.

The 128th match of the Pro Kabaddi League (PKL), Season 6, will involve Bengal Warriors and Telugu Titans in action, later tonight too. The game will take at the same venue, i.e. Netaji Subash Chandra Bose Indoor Stadium in Kolkata. It is scheduled to begin at 9.00 pm (IST).

The match will be able to see the live match telecast on Star Sports 2/HD channels. The live streaming of the game can be seen on Hotstar. If the fans want to catch the latest updates about the PKL match, then click here.