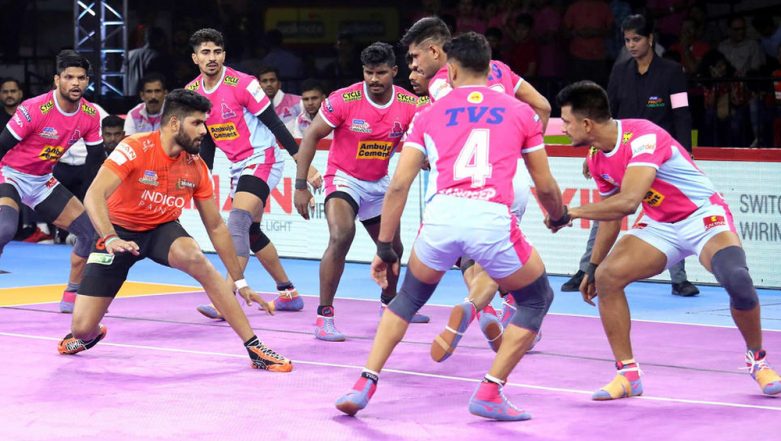 In the 84th match of the Pro Kabaddi League (PKL), Season 7, it will be Jaipur Pink Panthers who will lock horns with Haryana Steelers on September 11. The contest will be played at Netaji Subhash Chandra Indoor Stadium in Kolkata on Wednesday. The HAR vs JAI, PKL 2019 match is scheduled to begin from 7.30 pm IST. Haryana Steelers have played 13 games this season out of which they have won 9 and lost 4. With 46 points on so far, Haryana is on the 4th spot of PKL season 7 points table. PKL 2019 Today's Kabaddi Matches: September 11 Schedule, Start Time, Live Streaming, Scores and Team Details in VIVO Pro Kabaddi League 7.

On the other side, Jaipur Pink Panthers have played 13 matches this year from which they have won 7 and list 6. With 38 points, Jaipur is on the 6th spot of PKL Season 7 team rankings. For viewers who love to follow the Dream11 Kabaddi fantasy game, they will be happy to know these tips, tricks, and suggestions for the upcoming Dream11 team. Here we look at the players’ form and ratings to help you make a strong Dream11 team for HAR vs JAI, PKL match tonight. Haryana Steelers Vs Jaipur Pink Panthers Live Pro Kabaddi Score Match 84.

Haryana Steelers vs Jaipur Pink Panthers, PKL 2019, Dream11 Team Prediction- All-rounders: In this PKL contest, D Niwas Hooda (JAI), and Vishal (JAI) would be the top two picks as the all-rounders in this Dream11 team.

Haryana Steelers vs Jaipur Pink Panthers, PKL 2019, Dream11 Team Prediction- Raiders: For this HAR vs JAI, PKL 2019 contest, V Khandola (HAR) would be the sole raider in this Dream11, due to the team composition restrictions.

Keeping the players’ form and stats in mind, V Khandola and S Niwas Hooda would be the right choices to be appointed as captain and vice-captain respectively. It will be an interesting match for the fans to see the two sides go at each other. Stay tuned to LatestLY for all the latest updates about Pro Kabaddi League 2019.