Bengal Warriors produced a clinical performance to defeat the experienced Tamil Thalaivas 35-26 in a Pro Kabaddi League (PKL) Season 7 match in front of a packed crowd at the Thyagaraj Sports Complex here on Thursday. K. Parapanjan's Super 10 (10 raid points) was amply supported by Maninder Singh (9 raid points), which proved to be the difference for the Bengal side that moved to the second position in the points tally. 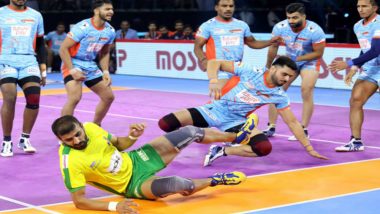 K. Parapanjan's Super 10 (10 raid points) was amply supported by Maninder Singh (9 raid points), which proved to be the difference for the Bengal side that moved to the second position in the points tally.

Experienced all-rounder Manjeet Chhillar returned to Thalaivas' line-up as coach E. Bhaskaran made a few changes to bring more stability to the side. Shabeer Bapu was added in the starting seven to share the raiding responsibilities with Arjuna awardee Ajay Thakur and Rahul Chaudhari.

The Thalaivas started the match on a bright note with Thakur impressing with his raids and the defence not allowing Warriors raider Maninder Singh to settle down. But Prapanjan had other plans and his multiple two-point raids helped Warriors reduce the

Tamil men on the mat before finally inflicting an All-Out in the 11th minute.

However, the experienced Thalaivas did not give up and immediately got back into the match, thanks largely to Thakur, who picked up 9 points in the first half that ended 15-14 in favour of the Bengal side.

The second half began with only three men remaining on the mat for Warriors but Sukesh Hegde produced a smart raid, taking out the dangerous Manjeet in the process, to start a revival for Warriors.

The Warriors defence held firm in the final minutes to seal the victory. Thakur's Super 10 mattered little as Warriors proved to be the better side in every department.

Questions will be asked about the performance of Thalaivas, who are falling short of expectations despite having a star-studded squad.

(The above story first appeared on LatestLY on Aug 29, 2019 10:01 PM IST. For more news and updates on politics, world, sports, entertainment and lifestyle, log on to our website latestly.com).