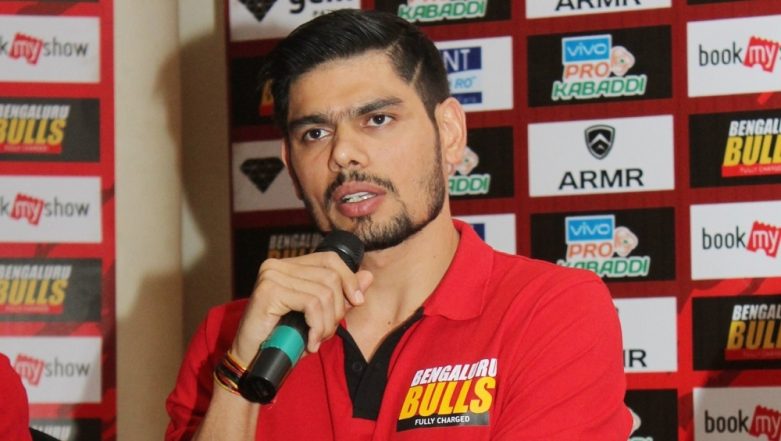 Mumbai, May 17: Defending Pro Kabaddi champions Bengaluru Bulls had a clear strategy while going to the tournament auctions in 2019, which was held last month in Mumbai. Of their 14-member squad, the franchise decided to keep their core team intact and retained five of their star players, who were a major force behind their title win in 2018. Skipper Rohit Kumar reckons the strategy will certainly help in a better show again this year.

In the auction for this year's league, slated to begin on July 19, most of the franchise opted to build a fresh team. However, it was only Bengaluru which showed immense faith in their players and decided to go the other way. Skipper Rohit, who accumulated 162 raid points for his team in 24 games last year, said the franchise had a clear strategy in mind which was not to break the winning combination. Pro Kabaddi League 2019: Iranians Dominate Foreign Players’ Auction.

Speaking to IANS, he said: "I think it was a good initiative by our franchise to keep the core team intact because I feel when a player enters any new team, it takes time for him to get acclimated to the surroundings, team culture and environment. So, when you have the guys who have been with you in the past, it helps the team to get click swiftly.

"The basic idea is that the players, coaches, support staffs all know each others' strengths and weaknesses, the area to improve and work on. You don't have to start working from scratch. It is just to resume from where you left last season." When quizzed about his strategy for this year, the Bengaluru skipper clearly stated that his sole focus will be to strengthen the raiding department of his side.

"Last year Pawan (Sehrawat) was simply unstoppable and won almost every game for us. This time again, we will try that our raiding department must be strong as if they (raiders) regularly bring points, it lifts pressure from the defenders. "Even if they (defenders) make one or two mistakes, it will not affect much when your raiders are on their top. Focus will be mostly on raiding and I just think that if our defenders don't pick points, they should also not concede as it will then still be a balanced affair," Rohit added.

Despite some stars in their raiding like the skipper himself and Pawan, who amassed a mammoth 271 raid points from just 24 games, Bengaluru will miss the services of another ace raider Kashiling Adake this year, who despite having a total of 561 points from 92 games failed to get any buyer. Rohit felt that though Kashiling will be missed, there are some other weapons in his armoury that can fill the gap for the third raider in his team. "In any team there should be atleast three raiders and four defenders. Yes, unlike previous year we don't have Kashiling this time but again we have Vinod Kumar, who has the capability to fill the gap, and also we have Sumit Singh, who I think will also deliver."

Speaking on his fitness, a confident Rohit said: "I am definitely focussing to enhance my performance. Last time, there was bit of injuries which hit my performance. I have started to work on it since last two months and still two more months are left so, all focus is on fitness as it will help me performing better on the mat."

The 29-year-old said that despite being the defending champions, their is no such pressure on him as most of his players are experienced enough to easily understand the game plan and play as per their strategy. In every season of the league so far, some or the other youngster or debutant have rocked the season and Rohit felt it was their stamina and talent which helps them hogging everyone's attention.

"These young guys are very talented as they have the stamina and power. What they just need is the right guidance as they have a hunger to learn and improve everyday. Being the experienced ones, whatever knowledge about the game we pass on to them, they grasp it very quickly and that is why some or the other new comer has always rocked the league since its inception. "What they can do, we (experienced players) can't as the main reason is age difference," he added.