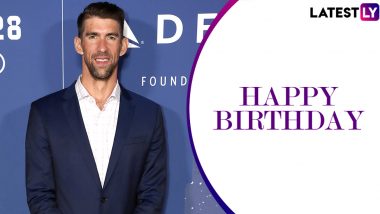 Michael Phelps, the most decorated Olympian of all-time and a swimming legend, celebrates his 35th birthday on June 30, 2020 (Tuesday). Phelps holds the all-time Olympic records of most Olympic gold medals, most gold medals in individual events and total medal counts in individual events. He also has won the joint-most gold medals at a single Olympic event and is also world-record holder in men’s 400m individual medley long course. Phelps won 82 medals in major international long course competitions of which 65 were in gold colour. Michael Phelps Teaches His Kid ‘Lion’s Breath’ or Simhasana for Mental Wellness.

Phelps was born in. He was youngest of three children and his mother Deborah Sue was a middle school principal. Phelps’ parents divorced when he was nine-year-old and the legendary swimmer in a later interview revealed how that had a negative influence on him as a child. Phelps began swimming at the age of seven after being pursued by his mother and sisters to learn the sport. By the time he was 10, Phelps was already holding a national record in his age group. As he turns 35, take a look at some interesting facts about Michael Phelps.

He first retired in 2012 following the London Olympics, stating "I'm done. I'm finished. I'm retired. I'm done. No more.” But came out of retirement in 2014 and competed at multiple events including the 2015 National Swimming Championships and recorded the fastest time in the world for that year. He also took part 2016 Olympics US trails and qualified for a record fifth Olympic event. At the games, he won five gold medals and a silver and retired as one of the greatest Olympians of all-time.

(The above story first appeared on LatestLY on Jun 30, 2020 07:30 AM IST. For more news and updates on politics, world, sports, entertainment and lifestyle, log on to our website latestly.com).