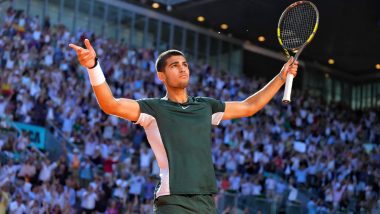 Alcaraz, who did not face a breakpoint in a dominant performance against the German, will rise to second in the ATP Race To Turin on Monday as he aims to make his debut at the prestigious ATP Finals in November. Carlos Alcaraz Beats Novak Djokovic To Book Madrid Open 2022 Final Berth.

With his 62-minute victory, the 19-year-old became the second-youngest player to win two Masters 1000 titles, after triumphing in Miami in March. Rafael Nadal captured crowns in Monte Carlo and Rome in 2005 when he was 18. Madrid Open 2022: Carlos Alcaraz Beats Rafael Nadal To Set Up Semifinal With Novak Djokovic.

In a dream week on home soil, the seventh seed also became the first player to eliminate Nadal and Novak Djokovic at the same clay-court event. It is the first time since David Nalbandian in Madrid in 2007 that a player has defeated three top four stars at a Masters 1000 event. Nalbandian beat Djokovic, Nadal, and Roger Federer in the Spanish capital when the tournament was played on hardcourt.

"I want to congratulate Carlitos. Right now you are the best player in the world," Zverev said during the trophy ceremony.

Alongside Masters 1000 titles in Miami and Madrid, the 2021 Next Gen ATP Finals champion has trophies in Umag, Rio de Janeiro, and Barcelona in the past year, meaning he is the youngest five-time titleist on Tour since Nadal clinched seven crowns by 19 in 2004-05. Alcaraz, who has won his past 10 matches, has yet to lose an ATP Tour final.

In a dominant first-set performance, Alcaraz successfully targeted Zverev's forehand with his power from the baseline. The 19-year-old constantly turned defence into attack with his agility, gaining the crucial break in the sixth game before serving well to lead. Fuelled by momentum, Alcaraz continued to put his foot down in the second set as his depth, width and weight of shot troubled Zverev, who was unable to control his groundstrokes, an atptour.com report said.

The Spaniard pulled the second seed around with his great touch and returned aggressively, breaking three times in the second set as he soared to victory. Alcaraz has now improved to 1-2 in his ATP Head to Head series against Zverev, gaining revenge for his defeats in Acapulco and Vienna in 2021.

Zverev was aiming to capture his third title in Madrid, having lifted the trophy in 2018 and 2021. The German defeated Marin Cilic, Lorenzo Musetti, Felix Auger-Aliassime and Stefanos Tsitsipas en route to his second final of the season in the Spanish capital, after also advancing to the championship match in Montpellier in February.

(The above story first appeared on LatestLY on May 09, 2022 09:58 AM IST. For more news and updates on politics, world, sports, entertainment and lifestyle, log on to our website latestly.com).