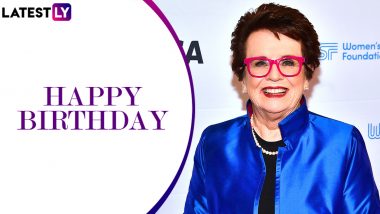 Former American tennis player Billie Jean King celebrates her birthday on November 22 (Friday). The former number one woman tennis player turns 76 years old. King is regarded as one of the best ever tennis players to play for United States of America. Her tennis career spanned from 1959 to 1983, during which she won 129 career titles. She became the fifth woman in tennis history to clinch a career Grand Slam in women’s singles. She also won a career Grand Slam in mixed doubles. On the occasion of Billie Jean King's birthday, we will look at some lesser-known things to know about her. Davis Cup 2019: India and Pakistan Clash to Be Held in Kazakhstan.

Other than tennis, King is also known for her support for gender quality and social justice. In 1979, she won the "Battle of the Sexes" tennis match against the 55-year-old Bobby Riggs, a former American tennis player. King has been awarded numerous honours for her achievements in the sport. To name a few, she was awarded Fed Cup Award of Excellence in 2010, Sports Illustrated Sportsman of the Year award in 1972, Time Persons of the Year in 1975 and BBC Sports Personality of the Year Lifetime Achievement Award in 2018. Below are some lesser-known things to know about Billie Jean King. Davis Cup 2019 Finals: Novak Djokovic Beats Yoshihito Nishioka, Rafael Nadal and Andy Murray Win As Well.

A biopic on King titled Battle of the Sexes released in 2017 in which actress Emma Stone portrayed the tennis legend. King is regarded as one of the best women players in the history of tennis. She is also known for her efforts to promote women tennis. She was also the founder of the Women's Tennis Association and the Women's Sports Foundation. We acknowledge her for her contribution to develop women's tennis and wish her a very happy birthday.

(The above story first appeared on LatestLY on Nov 22, 2019 08:15 AM IST. For more news and updates on politics, world, sports, entertainment and lifestyle, log on to our website latestly.com).