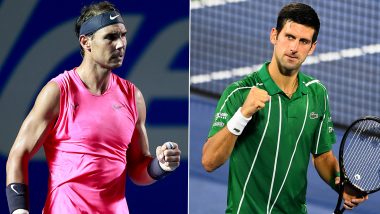 Rome, September 19: Top seeds Novak Djokovic and Rafael Nadal have entered the quarterfinals of the Italian Open with straight-set wins in their respective third-round matches.

On Friday, Djokovic defeated his fellow Serb Filip Krajinovic 7-6 (7), 6-3 to enter the last eight of the tournament for the 14th straight year.

"It was definitely one of the longest sets I think I have ever played," said Djokovic as per the ATP Tour website after the match. "Never easy, I think, emotionally to play against someone that is one of my best friends for many years...I think the first set could have gone a different way, as well.

"Fortunately for me it went my way and that allowed me to swing through the ball a bit more in the second set. Maybe physically and mentally, he dropped a level and I used my opportunities and capitalised to win in straight sets."

In other Round of 16 match, nine-time champion Nadal cruised past 2019 Monte-Carlo Masters finalist Dusan Lajovic 6-1, 6-3 to reach his 15th Rome quarter-final.

"I played at I think a very positive level of tennis. Of course it needs to keep improving. I need to keep working on a couple of things that are not coming automatically. But I can't ask for more," Nadal said. "(It was) another great evening for me against another good opponent. Can't complain at all. Much better (than) what I expected."

Former world number one Victoria Azarenka advanced to the quarterfinals as her opponent Darya Kasatkina of Russia retired during the first set with the scores at 6-6.Ninth-seeded Garbine Muguruza eased into the final eight as she Johanna Konta of Great Britain 6-4, 6-1.

(The above story first appeared on LatestLY on Sep 19, 2020 10:27 AM IST. For more news and updates on politics, world, sports, entertainment and lifestyle, log on to our website latestly.com).