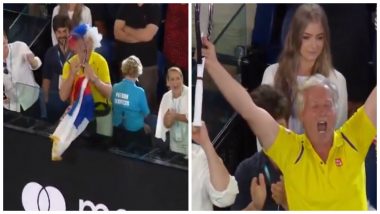 The Serb was in full-flow against his prime rival and 17-time Grand Slam champion Rafael Nadal. Djokovic took the Spaniard by surprise and claimed the first set with his clinical game. Djokovic won the match 6-3, 6-2, 6-3 as he continued his domination and outclassed the Spaniard in every department. However, his 'racket giving' act has become the talk of the town. Novak Djokovic's #10yearchallenge is Unmissable! Tennis Great Bares it (All) Most in These Pics!

Watch the Video of Novak Djokovic Giving Away His Racket to a Fan After Match in the Tweet Below:

Not just this, the serb also away the special shoes that he had got tailor made for this year's Australian Open. Some lucky fans got hold of the precious shoes that witnessed history at the Rod Laver arena.

These boots were made for... winning #AusOpen titles 👟@DjokerNole gives away his history-making shoes to some lucky fans.#AusOpenFinal pic.twitter.com/Ggsa4bi27U

Djokovic, 31, lifted a record seventh Norman Brookes Trophy. With this victory, Djokovic has become the first player to win seven Australian Open titles, one more than Roger Federer and Roy Emerson. Djokovic also went past Pete Sampras in terms of career Grand Slams. Djokovic, with 15 Grand Slams, is now only behind Roger Federer (20) and Rafael Nadal (17) in highest number of slams won by a player in men's singles.

(The above story first appeared on LatestLY on Jan 27, 2019 05:33 PM IST. For more news and updates on politics, world, sports, entertainment and lifestyle, log on to our website latestly.com).