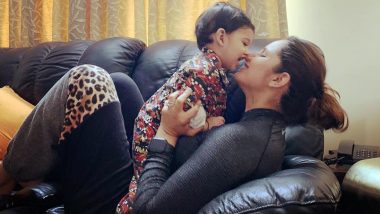 Sania Mirza shared an adorable photo with her son on Sunday. The Indian tennis star also revealed in her Instagram post how much she loves and cares for her son Izhaan Mirza Malik. In her post, the Indian sportswoman can be seen lying on the sofa with her son in her lap. “There’s no place I rather be #Izzy” she wrote along with the photo. Mirza, who is married to Pakistan’s cricketer Shoaib Malik, became a mother in October 2018. Now, Sania Mirza’s latest post gives an insight into the cute relationship between Mirza and her son. Have a look at the Sania’s Mirza post with her son Izhaan below.

Well, it looks like the former tennis doubles’ champion is having a great time with her son. Sania Mirza and Shoaib Malik is a popular sports couple and India-Pakistan pair. Both married each other in April 2010. Sania Mirza announced a break from tennis to look after her son. However, she is looking at a comeback in the sport. Soon after her delivery, Sania got back to her workout routine. Post-pregnancy, she avoided heavy-weight training due to her injuries and surgeries. Recently, she had also posted a video of her work out session on Instagram. Sania Mirza Workout and Diet: How the Indian Tennis Star Lost 26kg in Four Months After Her Pregnancy (Watch Videos).

(The above story first appeared on LatestLY on Sep 29, 2019 03:08 PM IST. For more news and updates on politics, world, sports, entertainment and lifestyle, log on to our website latestly.com).