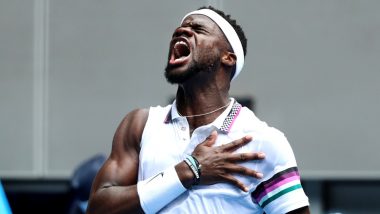 Atlanta [USA], July 4: American tennis player Frances Tiafoe on Saturday announced that he has tested positive for the coronavirus and has withdrawn his name from the All-American Team Cup. On Friday, Tiafoe played in the opening match of the All-American Team Cup against Sam Querrey in front of around 450 fans. He had taken a medical time-out during the match. The player revealed the news through Twitter and said he was tested negative for the COVID-19 a week before in Florida where he was training. "Unfortunately, I tested positive late Friday for Covid-19 and have to withdraw from the All-American Team Cup special event in Atlanta this weekend. Over the past two months, I have been training in Florida and tested negative there as recently as a week ago," Tiafoe tweeted. Novak Djokovic, Wife Jelena Test Positive for Coronavirus; Fourth Tennis Player to Contract Virus at Adria Tour.

"I am scheduled to have a second test early next week but have already begun the quarantine protocol as advised by the medical staff here in Atlanta. While I've been so excited to get back out there, the health and safety of everyone continue to be a top priority," he added. This is the first tennis event being staged in the USA since the lockdown, includes the eight top American men and features limited fans. The first match was played on Friday. Indian veteran tennis player Mahesh Bhupathi slammed the idea of staging a tournament during these difficult times and said 'someone needs to step up and stop this'.

"When both common sense and logic go out the window, Someone with some influence and authority needs to step up and say what's going on just needs to stop. Sure everyone wants a payday but this is poor leadership all round. " safety first " RIGHT!!!" Bhupathi tweeted.

The organizers had said earlier that all precautions would be in place to avert the possibility of a repeat of the Adria Tour event, where Novak Djokovic, Borna Coric, Victor Troiki and Grigor Dimitrov all tested positive. Christopher Eubanks will replace Tiafoe for the remainder of the event.

"Frances Tiafoe has tested positive for the coronavirus. Like all the players, Tiafoe was tested prior to or upon arrival in Atlanta and has passed daily temperature tests. Following his match, he was showing symptoms and was retested and tested positive. Tiafoe has left the event site and will not participate in the remainder of the event. Upon learning this information, we immediately began deep cleaning and sanitizing the event site, and enacted protocols in place for contact tracing and alerting individuals who may have been exposed," Eddie Gonzalez, Event Director for the All-American Team Cup said. "The health and safety of our event participants, staff and attendees are a top priority, and we will continue to diligently enforce all guidelines from local health officials," he added. (ANI)